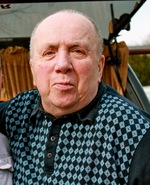 John is survived by his children, Brian (Amber) Stewart, Kristen Greene (Craig Meltzer), and Aaron Stewart; his stepchildren, Derek, Bradley, and Allison Gaurke; his grandchildren, Constance Marie, Kahlan, Christopher, Meghan, and Siobhan; his siblings, Donna (Michael) Brammer, Judy Gleasman, Brad (Nancy) Stewart; his former wife and good friend, Lorraine (Jaime) Olivero; and his nieces and nephews. In addition to his parents, he was predeceased by his brother, Jeff Stewart.

Calling hours will be held on Friday from 10-11am at Valley Community Church of the Nazarene, 2260 Salt Point Turnpike, Clinton Corners. The funeral service will follow at 11am. Interment will be at Wappingers Rural Cemetery.

Memorial donations may be made to Valley Community Church of the Nazarene. Please visit John's Book of Memories at www.mchoulfuneralhome.com.