In Memory of
Walter Franklin
March
1924 - 2018
Click above to light a memorial candle. 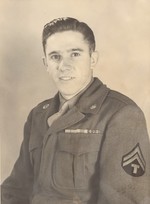 Walter Franklin March, a Fishkill resident since 1954, died on Wednesday, May 30, 2018 at Wingate at Dutchess in Fishkill. He was 94.
Son of the late Arthur E. and Bessie M. (Wade) March, he was born in Atlanta, GA on February 20, 1924. Walter enlisted in the U.S. Army in 1942 and served in the European Theatre during World War II. He was captured and held as a Prisoner of War. He was honorably discharged from service in 1945 and was awarded the Bronze Star in addition to several medals including the American Service, EAME Service, Good Conduct, and World War II Victory Medals.
Walter had a long career with Green Fuel Economizer Co. in Beacon, where he served as President, Vice President, General Manager, Production Manager, and Engineer. He retired in 1982. He enjoyed many hobbies, including carpentry, home improvements, and gardening.
On June 1, 1944, he married Elizabeth “Betsy” Keefe in DeRidder, LA. Walter was predeceased by Betsy on February 1, 2016.
He is survived by his daughter, Cheryl Kohut & her husband Fred of Cold Spring; his daughter, Rachel Freeman & her partner Joe Newman of Thomasville, GA; his son, Glenn March & his wife Karen of Fishkill; his grandchildren, Oren David, Evan Freeman, Alma Freeman & her husband Emil Meek, Casey Duchesne & her husband James, Devon Wright & her husband Mike, Quinn Kohut, and Connor March; his great-grandchildren, Arden Meek and Jack Wright; and many other loving relatives & friends.
Walter was predeceased by his wife and parents, as well as his daughter, Robin David; sister, Lucy Hardman; and brother, Raymond March.
Calling hours will be held from 5 to 6 p.m. on Saturday, June 2 at the McHoul Funeral Home of Fishkill, Inc., 1089 Main Street, Fishkill. A service will take place at 6 p.m., with the U.S. Army Honor Guard conducting Military Honors.
Interment will be held at 2 p.m. on Tuesday, June 5 at the Fishkill Rural Cemetery, 801 Route 9, Fishkill.
In lieu of flowers, memorial donations may be made to the National League of POW/MIA Families, 5673 Columbia Pike, Suite 100, Falls Church, VA 22041; www.pow-miafamilies.org
For directions and online tributes, you may visit Walter’s Book of Memories at www.mchoulfuneralhome.com.