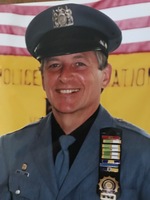 Mark was born in Bronx, NY on January 25, 1948 to Rudolph and Jean Gado. He married Jill, his childhood sweetheart on March 21, 1971. Together, they raised their two sons and had four grandchildren.

Mark spent 29 years with the City of New Rochelle Police Department and two years as a federal agent with the Department of Drug Enforcement Administration. He was a 3rd generation Italian-American, a combat veteran of the Vietnam War, an accomplished author of several books, and a 9/11 first responder. Among his many achievements, Mark was exceptionally proud of returning to college and completing a B.S. and M.S in Criminal Justice from Iona College.

Mark found comfort in riding his Harley Davidson motorcycle with the Patriot Guard Riders, a group whose mission is to shield families of fallen heroes from those that would disrupt the services of their loved ones. Mark inspired his friends and family to respect our military, veterans, and first responders through his selfless actions.

When his kickstand was down, he could be found playing tennis and racquetball; picking fresh herbs and vegetables from his garden; cooking in the kitchen; or enjoying a cold screwdriver with a splash of club soda by the pool surrounded by his family and friends.

Mark was preceded in death by his mother, Jean. He is survived by his father, Rudy (Marilyn); his wife, Jill; his two children, Mark (Tara) and Chris (Stacie); his four grandchildren, Alanna, Ryan, Benjamin, and Nicholas; his brothers Pete (Linda) and Kurt (Eileen); several in-laws, cousins, nephews, nieces, and a host of long-time friends.
In lieu of flowers or gifts, the family is asking for donations to the Wounded Warrior Project in his honor.

A funeral service will be held on Saturday, September 22, at 11:30 am at St. Denis Church, 602 Beekman Road, Hopewell Junction.