To share your memory on the wall of William Rudloff, sign in using one of the following options:

Provide comfort for the family of William Rudloff with a meaningful gesture of sympathy.

Print
William H. Rudloff (Bill) passed away on December 27, 2018 at Vassar Brothers Medical Center with family by his side.

Born in Poughkeepsie, NY on June 14, 1937, Bill graduated from Arlington High School, class of 1954. He then went on... Read More
William H. Rudloff (Bill) passed away on December 27, 2018 at Vassar Brothers Medical Center with family by his side.

Born in Poughkeepsie, NY on June 14, 1937, Bill graduated from Arlington High School, class of 1954. He then went on to earn degrees from Alfred Tech in Alfred, NY and the Rochester Institute of Technology. Bill married the love of his life, Norma (Neeley), on March 29, 1958. They celebrated their 60th wedding anniversary this past year.

Bill started his career as a mechanical engineer in Rochester, NY where he worked for 12 years before returning home to LaGrangeville to establish a business of his own. After twelve years in business, he joined IBM, eventually becoming a manager and working in both the Fishkill and Poughkeepsie locations.

During the 70's and 80's, Bill was a member of the Lagrange Lions Club. While serving as President of the club (1981-82), he came up with the idea of building a bandshell in Freedom Park (Town of Lagrange, NY) and was instrumental in organizing volunteers for its construction. After retiring from IBM in 2000, Bill followed his lifelong passion for airplanes and learned to fly. He became a pilot and a member of the Grasshopper Flying Club and continued to fly recreationally until shortly before he passed.

Bill is survived and very much missed by his beloved wife Norma and their three children, daughter Connie Kuusisto and her husband Stephen of Syracuse, NY, son David Rudloff of Williamsburg, VA, and daughter Karen M. Rudloff of Manchester, NH. Also blessed to have had him in their lives are six grandchildren: Tara Connell, Ross Connell, Michael Rudloff, Kyle Bedell, Christian Bedell, and Amy Bedell. Bill was predeceased by his parents, Ernst and Margarethe (Bardenhagen) Rudloff, sister Marion Rudloff Breck, and daughter-in-law, Karen (Johnson) Rudloff.

A Celebration of Life service is being planned for Saturday, March 23, 2019 at 11am at the First Evangelical Lutheran Church in Poughkeepsie where Bill was a member. Please visit Bill's "Book of Memories” online at https://www.mchoulfuneralhome.com/book-of-memories/3684329/Rudloff-William/service-details.php for further details as they become available.

In lieu of flowers, memorial donations may be made to Smile Train, 633 Third Ave., 9th floor, New York, NY 10017 or by visiting www.smiletrain.org.
Read Less

Donations are being accepted for: SMILE TRAIN INC.

Consider providing a gift of comfort for the family of William Rudloff by sending flowers.

We encourage you to share your most beloved memories of William here, so that the family and other loved ones can always see it. You can upload cherished photographs, or share your favorite stories, and can even comment on those shared by others.

Posted Dec 20, 2019 at 08:58am
Bill and I were friends from the Grasshoppers and he was such a wonderful man. Every year when we would have the Christmas party that I would cater he was always so appreciative and would always ask how I was doing and always thank me for the wonderful food and for all the work I did on the party! Despite how he was feeling, he was always in good spirits and would always talk flying! The Grasshoppers really miss him a lot!
Comment Share
Share via:
CK

To borrow from the book "Love You Forever" by Robert Munsch:

"I'll love you forever
I'll like you for always
As long as I'm living
My (Daddy) you'll be."

Bill was one of those great guys from that great generation..........you naturally respected him simply because of who he was.
The last time we saw each other was at the airport and he was in good spirits, since he had just been up flying.
All of us in the flying club will miss him very much. 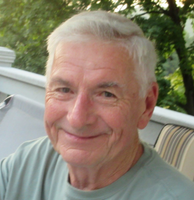 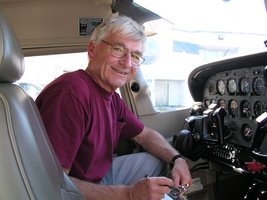 Bill was not active on Facebook but he did upload this photo of himself doing what he most loved to do. He learned to fly AFTER he retired, thereby fulfilling his childhood dream of becoming a pilot. 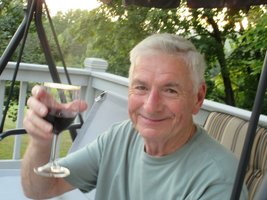 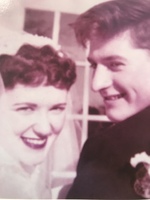 Bill Rudloff and Norma Neeley were married March 29, 1958.
Bill and Norma Rudloff recreating their wedding photo, same place, on their 50th wedding anniversary.
50th Wedding Anniversary
Bill and Norma celebrated their 60th Wedding Anniversary March 29, 2018.
Pilot Bill in flight over Lake Winnipesaukee, NH.
June 13, 2015. Bill caught a foul ball.
Bill and Norma, Christmas 2014
Bill with my mom and Norma during a visit just a couple of years prior to my mom's death. It was a highlight during her illness. They are life-long friends and had a very nice visit near the Pennsylvania border.
Please join us...
12
4
+8
Add Photos