To share your memory on the wall of Americo Imperatori, sign in using one of the following options:

Print
Americo A. Imperatori, 93, an area resident since 1940 and previously of Corona, Queens, died on February 20, 2019 at the NYS Veterans Home of Montrose.

Born on June 19, 1925 in Corona, Americo was the son of Augustino and Lidia (Moro) Imperatori. On June 29, 1950 in England, Americo married Jean Buckingham who predeceased him in 2004.

Americo proudly served our country in the US Army during World War II. He then served in the US Navy during the Korean War. A self-employed builder, he also worked for Hillis Park Corporation in Dutchess County. He loved traveling and held his private pilot's license. He was also a member of the Arlington American Legion and life member of the Italian Center.

The family expresses their gratitude to both the Veterans Administration and the New York State Home for Veterans.

Donations can be made to Hudson Valley Honor Flight at https://hvhonorflight.com/donate/.

Consider providing a gift of comfort for the family of Americo Imperatori by sending flowers.

We encourage you to share your most beloved memories of Americo here, so that the family and other loved ones can always see it. You can upload cherished photographs, or share your favorite stories, and can even comment on those shared by others. 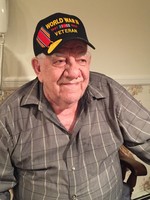