To share your memory on the wall of Guillermo Sanchez, sign in using one of the following options:

Print
LAGRANGE - Guillermo A. Sanchez, 88, an area resident for 18 months and formerly of Yonkers, died on May 25, 2019 at Vassar Brothers Medical Center.

Born in Ecuador on August 8, 1930, he was the son of Guillermo and Teodora (Mejia) Sanch... Read More
LAGRANGE - Guillermo A. Sanchez, 88, an area resident for 18 months and formerly of Yonkers, died on May 25, 2019 at Vassar Brothers Medical Center.

Born in Ecuador on August 8, 1930, he was the son of Guillermo and Teodora (Mejia) Sanchez. Guillermo was employed as a Machine Operator for Pitney Bowes in Stamford, CT. He was a parishioner of St. Martin de Porres Church, Poughkeepsie, and had served as an Usher at Immaculate Conception St. Mary’s Church in Yonkers. An avid soccer fan, he also enjoyed the New York Yankees. Known to his friends as “Willy“, Guillermo was a positive energy that always placed a smile on everyone he encountered. He was loved.

Guillermo is survived by his children and their spouses, Patty and Richard Nickerson, Alberto and Theresa Sanchez, and Alfredo Sanchez; his grandchildren, Richard Jr. and Victoria Nickerson, Jessica, Ryan and Natalie Sanchez; and his sisters, Gloria Piedad Corral and Lydia Letty Flores.

Calling hours will be held on Thursday from 2-4 and 7-9pm at the McHoul Funeral Home, Inc., 895 Route 82, Hopewell Junction. The Mass of Christian burial will be offered on Friday at 10am at St. Martin de Porres Church, 118 Cedar Valley Road, Poughkeepsie followed by interment in Poughkeepsie Rural Cemetery.

Consider providing a gift of comfort for the family of Guillermo Sanchez by sending flowers.

We encourage you to share your most beloved memories of Guillermo here, so that the family and other loved ones can always see it. You can upload cherished photographs, or share your favorite stories, and can even comment on those shared by others.

Posted May 30, 2019 at 04:07pm
From the first time Billy and I meet Cheverico it was instant likeness.A witty sense of humor,he also enjoyed music which endeared him to Billy. He is now singing and telling witty jokes to St. Peter. Our condolences to the family. Love you. Billy and Mimi.
Comment Share
Share via: 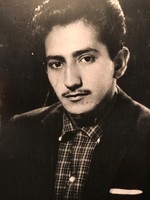