To share your memory on the wall of Edward Vollheim, sign in using one of the following options:

Provide comfort for the family of Edward Vollheim with a meaningful gesture of sympathy.

Print
FISHKILL – Edward Louis Vollheim, a local area resident since 1962 and formerly of Stockport, NY, passed away on Monday, June 10, 2019 at the Wingate at Beacon Health Care Center. He was 85.

Son of the late Henry W. and Minna (Thies) ... Read More
FISHKILL – Edward Louis Vollheim, a local area resident since 1962 and formerly of Stockport, NY, passed away on Monday, June 10, 2019 at the Wingate at Beacon Health Care Center. He was 85.

As a teenager, Edward worked as a lifeguard and he saved two pairs of people from drowning on two separate occasions. In 1953, he enlisted in the U.S. Army, where he was a notable marksman, and served during the Korean Conflict. He was honorably discharged from service in 1955.

Edward enjoyed many hobbies such as woodworking, watercolor painting, pen & ink, photography, in addition to playing the harmonica, guitar, and keyboards. He was self-taught in mathematics, welding, macramé, art, writing music, cigar making, auto repair/painting, bookbinding, calligraphy, and many other interests. Always eager to maintain his vast knowledge, he read through an entire dictionary and a sea of encyclopedias. He utilized his skills to build a beautiful, long, soft stonewall in front of his home.

On September 6, 1958, he married Imtraud “Trudy” Gast in Hudson, NY. Trudy survives at home in Fishkill.

Additional survivors include two sons: Steven Vollheim of Chester and Alan Vollheim & his wife Sharon of Lake Katrine; his granddaughter, Ally Vollheim; and many other relatives & friends.

Services will be private and at the convenience of the family. For online tributes, you can visit www.mchoulfuneralhome.com.
Read Less

Posted Jun 15, 2019 at 09:35am
My condolences to the family. Please be comforted by the Bible's promise of the resurrection. John 5:28,29, Acts 24:15. If you would like to learn more about the wonderful promises in the bible, please visit jw.org.
Comment Share
Share via:
HS

Posted Jun 12, 2019 at 09:07pm
We cannot begin to tell you how moved we are that in your hour of sorrow you took the time to leave a message for us. We cried, and so did the staff. We shall never forget that just a week ago, your husband/dad played his beloved harmonica! May you find comfort in the sure knowledge that Edward now rests in God's eternal embrace.
Max and Harriet Sandmeier
Comment Share
Share via:
A

Posted Jun 12, 2019 at 12:08pm
My sincere condolences to your family. May you find comfort in the promise of Revelation 21:4 of a time when death will be no more and loved ones will be reunited.
Comment Share
Share via: 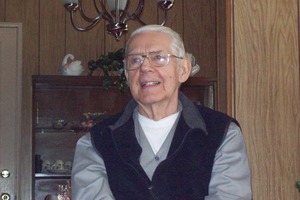