To share your memory on the wall of Louis Ruiz, sign in using one of the following options:

Print
Poughquag – Louis A. Ruiz, Sr., 78, a resident of Poughquag, NY since 1979 and previously of the Bronx, died on June 28th surrounded by his loving family at Vassar Brothers Medical Center.

Born August 22, 1940 in Manhattan, Louis was t... Read More
Poughquag – Louis A. Ruiz, Sr., 78, a resident of Poughquag, NY since 1979 and previously of the Bronx, died on June 28th surrounded by his loving family at Vassar Brothers Medical Center.

Born August 22, 1940 in Manhattan, Louis was the son of the late Angel and Isaura (Davila) Ruiz.

He attended James Monroe High School, graduating in 1959 and then proudly enlisted and served in the United States Army from 1959 to 1965 in the Medium Tank Battalion 66th Armor Division.

Louis worked for his father’s bakery before enlisting. After the Army, Chevrolet as a mechanic for a couple of years and then worked at IBM in East Fishkill for 26 years specializing in Forms Management until his retirement in 1995.

He was a member of St. Denis Church. He loved fishing, traveling, playing with all the family pets, making people laugh and being with his family. He was a loving husband. A loving father. A good man. He was also a big fan of Star Wars and Game of Thrones.

In addition to his loving wife of 53 years, Margaret, Louis is survived by his son Louis J. Ruiz, Jr. of Poughquag, his daughter Dana Canzone and her husband Ralph of Poughkeepsie; grandchildren Sarah and Matthew; sister, Norma Kaye and her husband David of Naples, FL; brother, Benigno Ruiz and his wife Patty of Baltimore, MD; favorite cousin Julio Albino and his wife Mercedes of Naples, FL; one beloved niece and several nephews.

The family wishes to thank the doctors, nurses and aids at Lutheran Care Center for the care they gave and showed Lou during his last years.

Memorial Donations may be made to Wounded Warriors Project or the American Diabetes Association.
Read Less

Consider providing a gift of comfort for the family of Louis Ruiz by sending flowers.

We encourage you to share your most beloved memories of Louis here, so that the family and other loved ones can always see it. You can upload cherished photographs, or share your favorite stories, and can even comment on those shared by others. 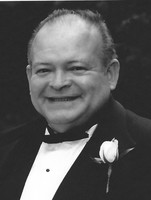