To share your memory on the wall of Gerard Salamone, sign in using one of the following options:

Provide comfort for the family of Gerard Salamone with a meaningful gesture of sympathy.

Born on June 25, 1942 in Brooklyn, NY Gerard was the son of Alessandro and Domenica Salamone.

Born on June 25, 1942 in Brooklyn, NY Gerard was the son of Alessandro and Domenica Salamone.

Gerard proudly served in the United States Army and was one of New York City’s Bravest where he worked as a Firefighter.

On November 16, 1968 he married the love of his life Marie, at St. Finbars Church in Brooklyn, NY.

Gerard enjoyed singing and entertaining, Frank Sinatra music, and was known for his sense of humor. Above all, he loved being a Husband, Father and Grandfather.

Gerard is pre-deceased by his grandson Francesco Gerard Salamone.

Calling hours will be Wednesday August 21, 2019 at the McHoul Funeral Home of Fishkill. 1089 Main Street Fishkill, NY from 1-4pm and 7-9pm. A mass of Christian Burial will be Thursday August 22, 2019 10am at St. Mary’s Mother of the Church in Fishkill. Interment to follow at Calvary Cemetery, Woodside, NY.

Consider providing a gift of comfort for the family of Gerard Salamone by sending flowers.

We encourage you to share your most beloved memories of Gerard here, so that the family and other loved ones can always see it. You can upload cherished photographs, or share your favorite stories, and can even comment on those shared by others.

Posted Aug 21, 2019 at 03:57pm
Jerry was an intense guy that was always looking out to make you a better person. My memories are from long ago, but I can still remember how he taught his sons & all of us to play baseball. He also taught us many other things about growing up, and I truly appreciate it all. These may not have seemed like important things at the time, but now that we're all a bit older, we see how much he cared for us. May Mr. Salamone rest in peace, he was one of the last Mohicans for sure.
Comment Share
Share via: 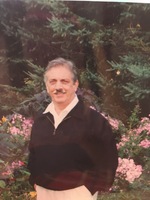