To share your memory on the wall of Vito Navarro, sign in using one of the following options:

Born in the Bronx on August 19, 1939, he was the son of the late Gaetano and Ernestina (Cecere) Navarro. Vito proudly served in the US Army and was stationed in Korea. He was a hard-working man who spent his career as a contractor and driver for various companies including Crown Gas and First Student Bus Company.

Vito was an avid fan of the NY Yankees and Giants who also liked painting. A proud “Leo”, he collected lion memorabilia. Most of all, he will be remembered by all who knew him as the “Life of the Party” and was a friend to all. Most of all, he loved his family and enjoyed spending time with them.

On February 21, 1965 at St. Francis de Rome Church in the Bronx, he married Barbara Torrente Navarro who survives at home. He is also survived by his children, Nicole Audia and her husband Chris of Union Vale, Devon Navarro of Union Vale, Jonas Navarro and his wife Macon of New Paltz, and Morgan Navarro and her partner Jesse Burns of Glenham; his grandchildren, Abbie, Olivia, Callie, Xylie, Rayna, Isla, and Silas Vito; his sisters, Norma Aurigemma and her husband Marty and Patricia Casatelli; his sisters-in-law and brothers-in-law, Carole and Warren Carroll and Elaine and Eddie Hutchinson; and many cousins, nieces, nephews, and friends. In addition to his parents, Vito was also predeceased by his brother-in-law, Hank Casatelli.

Calling hours will be held on Wednesday from 4-8 pm at the McHoul Funeral Home, Inc., 895 Route 82, Hopewell Junction followed by military honors at 8pm conducted by the US Army Honor Guard. A funeral service will be held on Thursday at 11 am at the funeral home.

Donations may be made in Vito’s memory to Castle Point VAMC. Please visit Vito’s Book of Memories at www.mchoulfuneralhome.com.
Read Less

Consider providing a gift of comfort for the family of Vito Navarro by sending flowers.

We encourage you to share your most beloved memories of Vito here, so that the family and other loved ones can always see it. You can upload cherished photographs, or share your favorite stories, and can even comment on those shared by others.

Posted Sep 29, 2019 at 08:37am
Dear Navarro Family,
I have just read about Vito’s passing in the paper. I had to reach out and send my condolences. My Dad, Joe Kasak and Vito were good friends. I would often run into Vito around town over the years and always loved catching up with him. He loved to tell me all about his kids,grandchildren, and Barbara. He was truly a light every time I saw him! I’m hoping that Vito and my Dad are in Heaven together, sharing a drink and having some laughs. Sending you hugs and love at this difficult time. Warmly, Suzanne Gale
Comment Share
Share via:
TF

Posted Sep 26, 2019 at 10:35am
Our deepest sympathy to Vito's wonderful family. A tree will be placed in his memory. He was truly a star!! He lit up every room he entered as I am sure he is doing in heaven. Love you Vito ❤️🌹🙏

Posted Sep 23, 2019 at 08:05pm
Dearest Navarro Family;
Let me offer my deepest condolences to all.
This is extremely difficult as we all feel the
pain of this loss. Therefore, let me offer some
intimate thoughts I had with Vito.

Dear Vito,
There is so much sorrow in my heart for your passing
that has affected me like few before.
I always felt that maybe, with a little bit of luck, you
would have survived this life challenge a bit longer.
However, as we now know, God had other plans!
I want you to know that you were the third brother
I never had.
You were special!
May you finally rest in peace!
Vito, I love you!
Many prayers, Mertz!
( I Never knew why you called me that; then again,
maybe you didn’t know either)!!
P.S. Hold that string TAUT ‘til I get there !!!!

Posted Sep 23, 2019 at 03:26pm
I first met Vito back in 1970 when I was living in Millbrook, NY. I immediately took to this crazy, funloving, full of life, incredible human being and we soon became good friends. Through the years that followed, life took us both in different directions, and though our paths did not cross often, I would always wonder what Vito was "up to" and how he was doing. However, when we finally did meet up again, we simply just picked up where we had left off. I will remember this wonderful man with great affection, and I extend my sincere & heartfelt condolences to his family and friends. Rest in peace Vito, knowing that you were loved by many and will be dearly missed.
Comment Share
Share via:

Posted Sep 22, 2019 at 04:26pm
So very sorry Vito is gone. He was a wonderful guy and always brought fun and excitement to all the family gatherings. Always something funny to say or some stories to tell. He made every get- together great. He will be missed terribly.........gone but never forgotten. RIP Vito in Heaven and I know he will be watching over his family.
Comment Share
Share via: 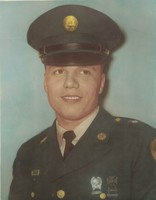