To share your memory on the wall of Stephen Curley, sign in using one of the following options:

Provide comfort for the family of Stephen Curley with a meaningful gesture of sympathy.

On July 19, 1980 in New Rochelle, Stephen married Janice Dorothea Culver who predeceased him on April 21, 2014. Stephen is survived by his children and their spouses, Nella and James Gordineer of Leesburg, TX, Stephen Curley III of Norfolk,CT, Patrick Curley and Azadeh Zeyghami of Cortlandt Manor, and Maribeth Curley of Poughkeepsie; his grandchildren, John and Maggie Gordineer, his step grandson, Jimmy Gordineer; and his sister, Elizabeth Ann Curley of Brewster, MA.

The Mass of Christian Burial will be offered at 10:15 a.m. on Friday, October 4 at St. Mary, Mother of the Church, 106 Jackson Street, Fishkill followed by inurnment in Fishkill Rural Cemetery.

Memorial donations may be made to the Vassar-Warner Home, 52 South Hamilton Street, Poughkeepsie, NY 12601 (www.vassarwarner.org)

Donations are being accepted for: VASSAR-WARNER HOME.

Consider providing a gift of comfort for the family of Stephen Curley by sending flowers.

We encourage you to share your most beloved memories of Stephen here, so that the family and other loved ones can always see it. You can upload cherished photographs, or share your favorite stories, and can even comment on those shared by others. 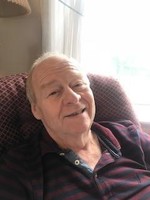