To share your memory on the wall of Mary Delasantra, sign in using one of the following options:

Print
WAPPINGERS FALLS - Mary A. Delasantra, 94, an area resident since 1989 and formerly of Yonkers, died on September 28, 2019 at the Fishkill Center for Rehabilitation and Nursing.

Born on September 14, 1925 in Bronx, NY, she was the daught... Read More
WAPPINGERS FALLS - Mary A. Delasantra, 94, an area resident since 1989 and formerly of Yonkers, died on September 28, 2019 at the Fishkill Center for Rehabilitation and Nursing.

Born on September 14, 1925 in Bronx, NY, she was the daughter of Michael and Emanuela D'Auria. She was a parishioner of St. Mary’s Church, Lady of the Falls, and had been a member of the Wappinger Senior Center.

Mary was predeceased by her husband, Victor Delasantra; both her children, Richard Delasantra and Gloria DiPaola; and her grandson, Joseph DiPaola. She is survived by her grandchildren, Frank and Jennifer DiPaola of LaGrange, Christina and Jon-Paul Aubry of Wingdale, and Nicole DiPaola of Wappingers; her great-grandchildren, Amanda, Brooke, Brendon, Brianne, Walter, Samantha, Mason, Jesse, Bella and Joshua; and her great-great-grandchildren, Joey, Piper, Robert and Dakota. Additionally, she leaves behind two special angels, Michael and Maggie Holsborg who loved and cared for Mary as if she were their own family.

Calling hours will be held on Tuesday from 4-8pm at the McHoul Funeral Home, Inc., 895 Route 82, Hopewell Junction. The Mass of Christian Burial will be offered on Wednesday at 9:30am at St. Mary’s Church, Lady of the Falls, 11 Clinton Street, Wappingers Falls. Interment will follow in Gate of Heaven Cemetery in Valhalla.

Memorial donations may be made to the Dyson Center for Cancer Care. Please visit Mary’s Book of Memories at www.mchoulfuneralhome.com.
Read Less

Donations are being accepted for: DYSON FOUNDATION.

Consider providing a gift of comfort for the family of Mary Delasantra by sending flowers.

We encourage you to share your most beloved memories of Mary here, so that the family and other loved ones can always see it. You can upload cherished photographs, or share your favorite stories, and can even comment on those shared by others. 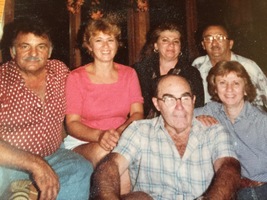