To share your memory on the wall of Ronald Mombello, sign in using one of the following options:

Provide comfort for the family of Ronald Mombello with a meaningful gesture of sympathy.

Son of the late Dr. Peter and Lee (DiBugno) Mombello, he was born in New York City on August 12, 1932. After attending the... Read More
EAST FISHKILL - Ronald Peter Mombello, 87, passed away at home in Hopewell Junction on Sunday, September 29, 2019.

Son of the late Dr. Peter and Lee (DiBugno) Mombello, he was born in New York City on August 12, 1932. After attending the Salisbury School in Connecticut, he went on to earn a B.A. from Hobart College in 1953, where he was active in the Sigma Chi Fraternity. He later received an M.B.A. from Indiana University. Ronald served in the U.S. Navy from 1956 to 1957.

He resided in Laguna Beach, CA for many years, where he worked as a Junior High School teacher. He wrote for several television programs including “Hollywood Squares” and “I Love Lucy”. Ronald relocated to New York, where he became an acting coach and author of several books such as “The Martial Artist as a Work of Art” and “Inspired: The Autobiography of an American Actor”. He also shared his interest in cinema as a movie critic for the Southern Dutchess News, as he provided commentary in the newspaper’s review columns, “On The Aisle” and more recently “On The Couch”.

Ronald was dedicated to Sigma Chi throughout his entire life, and for many years served as the fraternity’s Grand Praetor. He was also dedicated to the conservation of wildlife, especially wolves.

He is survived by his brother, Dr. Gary E. Mombello of Northford, CT; as well as his niece and nephews in addition to many grandnieces and grandnephews.
A memorial service will be held at a later date.

Calling hours will be held on Saturday, October 26, 2019 from 10am - 11 am at the McHoul Funeral Home of Fishkill, Inc. Burial will be private.

In lieu of flowers, memorial donations may be made in his name to the Wolf Conservation Center, P.O. Box 421, South Salem, NY 10590 (www.nywolf.org) or the charity of your choice.

Consider providing a gift of comfort for the family of Ronald Mombello by sending flowers.

We encourage you to share your most beloved memories of Ronald here, so that the family and other loved ones can always see it. You can upload cherished photographs, or share your favorite stories, and can even comment on those shared by others.

Posted Oct 09, 2019 at 09:38pm
He was a conservative liberal, and a liberal conservative; a philosopher king, and a pragmatic plebe; a realistic idealist and an idealistic realist; attune to human foibles, and a passionate humanist; a great listener, who was brimming with ideas; fiercely private, yet enjoyed nothing more than a shared experience; a great student, a great teacher. Movie reviews were not egotistical assertions, but rather opportunities to give historical context, to think, to learn, to reflect. His spacious smile, encyclopedic vocabulary (bonhomie!); his quirks... like, was it, 7 lemon slices with every dinner?! Our peripatetic conversations at dinner, each a unique mosaic of ideas. HEY, KIDDO. What a great, unique, special friend. Thanks, Ron, I mean, I REALLY thank you. Aren't we due for Tiramasu? Ron is dead. I can't get it through my head.....I miss you, Ron.
Comment Share
Share via:
J

Posted Oct 09, 2019 at 07:56pm
From the moment I met you I knew that you had a kind, unique and compassionate heart. I have so many memories of you and I hugging and kissing and you telling me “Bye” when you had enough of my nonsense. I wasn’t thrilled by being your #1.....I wanted to be your only one.

Posted Oct 05, 2019 at 10:02am
Growing up as a child, Ron would always send letters of wisdom and encouragement on my birthday - usually accompanied by a choice book. Throughout the years we would talk a few times a year and it was always great to get to know him a little better each time. I was just thinking after our last conversation on August 12, 2019 that I needed to check in with him more often. It had been 22 years since I last saw him at my wedding. The write-up he created about that day still hangs on the wall in our den. Per his request I sent him an email with pictures of the now teenage kids. As customary, he hung up saying... "I love you kiddo!"

Your personal friendship and absolute adherence to the fundamental principles and teachings of Sigma Chi always made your life a lighthouse for me to steer toward. You made a difference in my own life and I know in so many others. I will mourn loosing the ability to reach out to you, but always celebrate what you game to me and the world. You always fought the good fight, and although your work is done you have left your mark forever.

Your service to Sigma Chi as Grand Praetor was exemplary. You touched the lives of young men and alumni is so many positive ways. 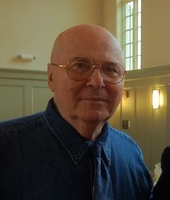