To share your memory on the wall of Jeanne Keppel, sign in using one of the following options:

Born in New Haven, CT on April 28, 1924, she was the daughter of Morton and Elizabeth (Odell) Morris. She grew up on her f... Read More
STORMVILLE - Jeanne Wright Keppel, 95, a lifelong area resident, died on November 3, 2019 at the Grand at Pawling.

Born in New Haven, CT on April 28, 1924, she was the daughter of Morton and Elizabeth (Odell) Morris. She grew up on her family’s dairy farm in Stormville and was a graduate of Pawling High School. She was a full-time farmer until her employment as a clerk for the United States Postal Service in Stormville.

Jeanne was a member of the Second Kent Baptist Church. She was also a life member of the Sylvan Grange, and a member of the Stormville Fire Company Ladies Auxiliary and the East Fishkill Seniors. She enjoyed traveling to such destinations as the Caribbean, China, Germany, Hawaii and London. She also loved playing cards and doing arts and crafts.
Jeanne is survived by her beloved companion, Lew Knapp Sr. of Stormville; her daughters-in-law, Susan Wright of Stormville and Patricia Wright of Troy; her grandsons and their wives, Joshua and Kate Wright of Lago Vista, TX and Jeremiah and Amanda Wright of Lago Vista, TX; her great-grandchildren, Jack, Ruby Jeanne and Jasper; her son, Thomas Wright of Dover Plains; and several nieces and nephews. She was predeceased by her husbands, Benjamin Utter, Dale Wright and Bernard Keppel; her sons, Richard Wright and Larry Wright; and her brother, Leslie Morris.

The family would like to thank the staff of the Grand at Pawling for their care and compassion.

Calling hours will be held on Thursday from 5-8pm at the McHoul Funeral Home, Inc., 895 Route 82, Hopewell Junction. The Funeral Service will be held on Friday at 10am at the funeral home followed by interment in Beekman Cemetery.

Consider providing a gift of comfort for the family of Jeanne Keppel by sending flowers.

We encourage you to share your most beloved memories of Jeanne here, so that the family and other loved ones can always see it. You can upload cherished photographs, or share your favorite stories, and can even comment on those shared by others.

Posted Nov 07, 2019 at 11:15am
Tom & Family,
Your Mom was always special to me. Memories if the pistachio pies and other things.
My thoughts and prayers go out to you and the family.
I apologize that I can't be there.
John P.
Comment Share
Share via: 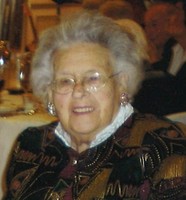