To share your memory on the wall of Robert Eckler, sign in using one of the following options:

Print
Rev. Dr. Robert DuBois Eckler, 79, was welcomed into the arms of Jesus on November 19, 2019 from Vassar Brothers Medical Center, with his loving family surrounding him.

Born in Walden, NY on April 24, 1940, he was the son of Harold and M... Read More
Rev. Dr. Robert DuBois Eckler, 79, was welcomed into the arms of Jesus on November 19, 2019 from Vassar Brothers Medical Center, with his loving family surrounding him.

Born in Walden, NY on April 24, 1940, he was the son of Harold and Mary Emma (Rhinehart) Eckler. Bob graduated from Northeastern Bible Institute, where he met his sweetheart, Dottie Hallquist. He was ordained to the Christian Ministry in 1962 and received degrees from Barrington College, Gordon Divinity School, and Gordon-Conwell Theological Seminary from which he earned his Doctor of Ministry degree. Pastor Bob served many churches during his more than 55 year career, including those in Malden, MA, Newburyport, MA, Pawtucket, RI, Fishkill, NY and Pawling, NY. He was Chaplain for the Pawtucket Red Sox for 8 years and produced various programs for TV and radio. He was one of the founders of Creekside Ministries of Poughkeepsie, which included both a Christian counseling center and a house church.

Pastor Bob was instrumental in starting the Beach Ministry in Hampton Beach, NH in the 1970’s. He received his private pilot’s license in 1960 and was also a member of the Pawling Rotary Club.

Bob is survived by his loving wife Dottie, whom he married on July 15, 1961 in Bridgeport, CT. They had 58 wonderful years together. He is also survived by his children and their spouses, Wendy and Larry Kranseler of Sharon, MA, Kevin and Lisa Eckler of Verbank, NY and David Eckler of Somersworth, NH; his 5 grandchildren, Alex Simard, Jenna and Lucas Kranseler, and Chloe and Zach Eckler; his sister Shirley Pooler and her husband Rev. John Pooler of Port Crane; and many extended family members.

There will be no funeral service, but a “Celebration of Life” service will be planned in the new year in the Fishkill area.

Memorial donations may be made to Samaritan’s Purse (https://www.samaritanspurse.org/) or Dutchess County SPCA (https://dcspca.org/) .

Arrangements are under the direction of the McHoul Funeral Home, Inc. Please visit Pastor Bob’s Book of Memories at www.mchoulfuneralhome.com.
Read Less

Consider providing a gift of comfort for the family of Robert Eckler by sending flowers.

Posted Jun 28, 2020 at 10:25am
I attended the Woodlawn Baptist Church in Pawtucket, Rhode Island while a student at Brown University. Pastor Eckler made an unforgettable impression on me. His faith was powerful and sincere. He was a model of Christian love and humility. His sermons drew out treasures of wisdom and meaning from any passage or verse of the Bible. I am so sorry to learn of his passing, but happy to know that he now stands in the presence of God who he served so well. My condolences and prayers to Mrs. Eckler and the Eckler family.
Comment Share
Share via:

Posted Nov 23, 2019 at 07:42pm
My condolences to the Eckler Family...
This was said of Pastor Bob: “This mighty prayer warrior deeply cared for those who were broken...”. I will never forgot my first encounter with him at our church of about 700 when he asked me about a certain situation I had shared with him a couple of weeks before. I never experienced this in our world of busy people. I was so touched.

I keep envisioning him in heaven in the front of a parade waving a flag and announcing he ran the race and won the prize (Phil 3:14). He was no wallflower and that was one of the things I loved the most about him.

So long Pastor Bob (for now)

Amen, Carol. He loved us all, and we him. He was one of the best. I know he is laughing that belly laugh of his in heaven.
L

My sympathy goes to the family and friends of Pastor Eckler. When I was searching for a church home, I came to FBC and I enjoyed his ministry and I was sad when he left the church. He had a great sense of humor. Diane Holmes 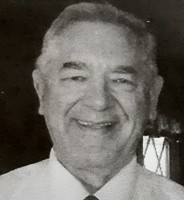