To share your memory on the wall of Marian Crispo Fowler, sign in using one of the following options:

Provide comfort for the family of Marian Crispo Fowler with a meaningful gesture of sympathy.

Born in the Bronx on March 5, 1933, she was the daughter of Felice and Bella (Zisk) Spinapolice. Marian had worked as an Administrator for IBM at the World Trade Center. She relocated with her family to Scotland for 25 years. She returned to Glenham, and worked part-time at the Blodgett Library. Marian was a parishioner of St. John’s Church in Beacon.

Marian was predeceased by her husband Alphonse L. Crispo, her daughter Lisa Crispo, and her mother Bella and father Felice. She is survived by her sons and their wives, Allan and Kimberly Crispo of FL, Gary Crispo and Daisy DePuthod of Wiccopee, and Phillip Crispo and Susan Walser of Camden, ME; her sisters, Felicia Pagones, Arlene Grudzina and Sylvia Hubecky; 9 grandchildren, 17 great-grandchildren and many nieces and nephews.

Calling hours will be held on Friday from 6-8pm at the McHoul Funeral Home, Inc., 895 Route 82, Hopewell Junction. There will be a Funeral Service at 8pm. Interment will be in St. Joachim’s Cemetery at a later date.

Memorial donations may be made to St. Jude Children’s Hospital. Please visit Marian’s Book of Memories at www.mchoulfuneralhome.com.
Read Less

Consider providing a gift of comfort for the family of Marian Crispo Fowler by sending flowers.

We encourage you to share your most beloved memories of Marian here, so that the family and other loved ones can always see it. You can upload cherished photographs, or share your favorite stories, and can even comment on those shared by others.

Posted Dec 04, 2019 at 12:07pm
Dearest Marian, With 9 grandchildren and 17 great grandchildren I thought you might prefer a tree in lieu of flowers. May the love and beauty of your being be reflected in the hearts of those who love you. With kindest regards, Raymond 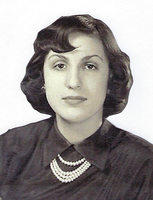