To share your memory on the wall of Elizabeth Weiss, sign in using one of the following options:

In lieu of flowers, memorial donations may be made to St. Jude Children’s Research Hospital. Please visit Elizabeth’s Book of Memories at www.mchoulfuneralhome.com.
Read Less

Consider providing a gift of comfort for the family of Elizabeth Weiss by sending flowers.

Posted Dec 12, 2019 at 12:08pm
I have heard so many inspirational stories about Aunt Betty from Lauren, Cathy and Larry. She lived a rich life and inspired all with her persistence and good humor. She will be greatly missed but her indomitable spirit lives on in all who knew her.
Lynn Huard Rockville Maryland
Comment Share
Share via:
PA

Posted Dec 12, 2019 at 09:59am
Pammy, Kevin and I send our deepest sympathies to you and your family on the passing of your mom. I hope you find peace and comfort in your warm memories of your mom over the years. Love, Patty Anderson
Comment Share
Share via:
S

Posted Dec 11, 2019 at 09:54pm
So sorry to the family for your loss.
I worked with Betty at Lakeland we had so many laughs, it was an honor to have known her.
She had a heart of gold, a beautiful lady inside and out!
She will be missed by all that knew her.
My prayers are with you.
Sincerely.
Sue Bianca

Posted Dec 11, 2019 at 09:33pm
Betty, what a blessing to know you! You will always be remembered and how you made us feel and how much love you always gave.You will be missed by so many and never forgotten. You were such a gift to us all and your Legacy will leave on through Larry, your children and grand children.Until we meet again,Sleep in Heavenly Peace my good friend!
Comment Share
Share via:

Posted Dec 11, 2019 at 04:32pm
Kirsten, So very sorry for your loss. Love and condolences to you and your family. Roger & Rose Story
Comment Share
Share via: 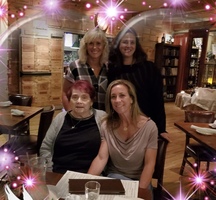 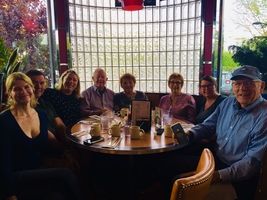