To share your memory on the wall of John MacNintch, sign in using one of the following options:

He was born on November 7th, 1935 in Moncton, New Brunswick to Laurie Kelley and Margaret Irene MacNintch. He married Joan Ann Nugent on June 21st, 1958.

For 31 years he worked at Bristol-Myers Squibb (1966-1997) and eventually became the Director Scientific Information at the Wallingford, CT site.

He is survived by his sons Michael and Sean, daughter-in-law Sarah Kaylor, and step grandson Jacob Richards.

He had a wide variety of interests including power boating, scuba diving, physical exercise, photography, reading, writing, skiing, kayaking, and playing music. During his retirement he spent ten years researching and writing a historical fiction novel on the Canadian Corps in World War I called “The Brother Keepers.” He also authored many articles on travel, boating, and scuba diving in The Atlantic Advocate, Trailer Life, Trailer Boating and Skin Diver Magazines.

Ted was kind, generous, and had a great sense of humor. He enjoyed life in, on, by, and under the water. Predominantly on the St. Lawrence River in the Thousand Islands, the Florida Keys, and the Little Bouctouche River in McKees Mills, Canada. He consistently had a convertible throughout his life as it reminded him of being in a boat.

Family, friends, and others whose lives Ted touched are invited to the McHoul Funeral Home 1089 Main St, Fishkill, NY 12524 at 2pm on Saturday, February 29th, 2020 to reminisce, grieve, support each other, and of course, just chat.

In lieu of flowers, memorial donations may be made to Save The River.
"Save The River was formed in 1978 to protect and preserve the ecological integrity of the Upper St. Lawrence River through advocacy, education, and research."
https://www.savetheriver.org/get-involved/make-a-donation
Read Less

Donations are being accepted for: SAVE THE RIVER INC.

Consider providing a gift of comfort for the family of John MacNintch by sending flowers.

Posted Feb 27, 2020 at 11:58am
We have so many family memories of Ted and Joan, particularly sharing our genealogy. Lots of fun times on the St. Lawrence. Our hearts go out to you, Mike, Sean and Nancy. Your California Cousins
Comment Share
Share via:
NF

Posted Feb 24, 2020 at 03:26pm
Please accept our most heartfelt sympathies for your loss... Our thoughts are with you and your family during this difficult time.

Posted Feb 19, 2020 at 11:30pm
Your father made such an impression on me. I so admired him. When I visited with my grandsons, your mom was so warm and welcoming and your dad impressed me with his wisdom. A truly lovely couple. They shared memories of our common relative, Olga which I greatly appreciated. Your dad took my grandsons to the edge of the water to show them how to toss a stone on the water. As I told your dad, I couldn’t put down the book he wrote - it’s one of my favourite books which I will forever cherish. He certainly had a way with words. Although it saddens me that they’ve both now passed on, it was apparent that once one passed, the other would soon follow. And it’s comforting to know that they were together again for Valentine’s Day. Your dad had written such a lovely tribute to your mom before - the love for one another was awe-inspiring. And both enjoyed talking about the talents and love for their boys. God bless, Deborah Powell
Comment Share
Share via: 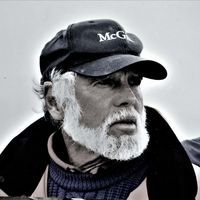