To share your memory on the wall of Dominick Vaccarelli, sign in using one of the following options:

Dominick proudly served our country in the United States Army as a Paratrooper between 1954 to 1956. He worked for 25 years as a cement mason for Local 780 in the Bronx until his retirement in 1992 and was a parishioner of St. Paul the Apostle Church in Yonkers.

Survivors include his children, Anthony and his wife Lisa of Georgia, Dominick and his wife Gina of Hopewell Junction, Christopher of Mahopac; and his grandchildren, Jessica, Dominick, Alyssa, Victoria, Emily, Julia, Jenna, Gabriella and Rosa.

Calling hours will be held on Thursday from 6-9pm at the McHoul Funeral Home, Inc., 895 Route 82, Hopewell Junction. The Mass of Christian Burial will be held privately for the family followed by entombment at Ferncliff Cemetery.
Read Less

Consider providing a gift of comfort for the family of Dominick Vaccarelli by sending flowers.

We encourage you to share your most beloved memories of Dominick here, so that the family and other loved ones can always see it. You can upload cherished photographs, or share your favorite stories, and can even comment on those shared by others.

Posted Mar 22, 2020 at 10:50pm
Dad, there are no words to describe how I feel today. You were a great father to me, a great husband to my beautiful mother and a great grandfather to my 3 beautiful girls and a great father-in-law to my wife. The upbringing I had from you and mom has made me the man I am today and the husband and father I am to my family. I remember the first time you took me hunting with you when I was 10 years old in Katonah. It was a day I still remember vividly to this day. I know I took it up a couple of notches from there haha. Since then, we have gone on many more trips and spent a lot of quality time together, which I will never forget. You have been a great grandfather to my girls and the memories they have with you and mommy will always be cherished. They still remember you and mommy coming up to our house every weekend and taking them to Friendly's, sleeping at your house, and going to the Diner. You were a great man and I will remember you for the rest of my life. We love you and miss you. Anthony, Lisa, Jessica, Ayssa and Emily.

Posted Mar 19, 2020 at 10:48am
I love when people tell me "you're just like your father." I'm sure they mean that I have a foul mouth, I speak my mind and I can fall asleep at the drop of a hat. Sleeping, not so much these days. Truth is, I wish I could be half the man my father was. The most selfless man I knew, always thinking of others. He once gave a homeless man he met on a train a job in construction. He kept him working for years, the man started a family and bought a home. He's still working to this day. Take a moment and imagine what my father would do for his family. That's why when it came time, I gave up my life to take care of him. I'm proud to say we granted both my parents their wishes to leave this earth, AT HOME surrounded by loved ones. After this, I will get my life back but I will NEVER be the same without my hero, my idol and my best friend. Even in sickness you gave me so many hysterical memories. You are now at peace with mom, your parents and sisters. I can hear mom yelling at you now for falling asleep while St. Peter is reading you the rules of heaven. Not that it matters, you won't follow them anyway. Love you pop, see you soon.
Comment Share
Share via:
JD

Posted Mar 18, 2020 at 10:03pm
Dad, where do I begin to reflect on a lifetime with you. You were a huge inspiration in my life and taught me many things. I remember you taking me to the park and playing ball with me after pulling up concrete all day. I remember wrestling with you on the floor and mom yelling at us to stop…but we didn’t. I remember taking family vacations and having a lot of fun together. I remember you teaching me that if I want anything in life, I had to apply myself and work hard. There was so much more that I can write, but the most important thing you showed me was Love. You showed me what it means to be a man who loves his family and led by example. You showed me what it is to Love a woman and care for her in good times and bad. Thank you for caring for Mom all those years. I watched you do so much for her and you showed me what true love is. It was the biggest honor in my life to help take care of Mom and you. I was so thankful that I could be there in the end for both of you both. Chris and I are learned from the best. We were so thankful to be with you and help you and Mom in your journey back home. I am so thankful to my brother Chris for taking you in and caring for you. He learned from the best. As you leave this world, you take a big piece of our hearts with you. Say hi to Mom for us and give her a big hug. You both will be in our hearts always even though they are broken. Love you both forever.
Comment Share
Share via:
LR

Posted Mar 18, 2020 at 07:10pm
Since I was 7 years old, I would laugh at Pop’s ability to make you laugh by giving that extra “steez”. His love for cannolis was only outranked by his stubbornness and his love for his family. Dominick and Victoria would send funny pictures of their latest escapade for coffee or to the store and there was always a story to go with it. He was able to give you a chuckle. I’m so glad you had the chance to live close by. He knows all you did and how you cared for him. May you find comfort in your memories and may the love in your heart give you peace, that he was proud to call you all his. Love you Dom, Gina, Dominick, Victoria, Chris and all your girls.
Comment Share
Share via: 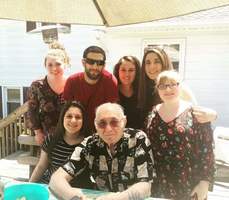