To share your memory on the wall of Joseph Murray, sign in using one of the following options:

Print
WAPPINGERS FALLS – Joseph A. Murray, 88, an area resident since 1972, died on March 17, 2020 at home surrounded by his family. He previously lived in the Bronx.

Born on July 6, 1931 in Verona, NJ, Joe was the son of the late Thomas and Lillian (Penny) Murray. He worked as a custodian for over 20 years for Wappingers Central School District until his retirement in 1998. He was a dedicated parishioner of St. Columba Church and a member of St. Mary’s Council Knights of Columbus.

On September 25, 1954 at Our Lady of Mercy Church in the Bronx, Joe married Ruth Anne (Martin) Murray who predeceased him in 2018. He is survived by his children and their spouses, Joseph Murray, Kathleen and Steven Alewine, Brian Patrick and Margaret Murray, Anne Marie and Guy Martin, Maureen Ritacco, and Stephen John and Sherry Murray; his son-in-law, Philip Rock; his grandchildren, Joseph III, Shane, Kelly, Melissa, Mina, Matthew, Ashley, Corey, Philip, Jacinta, Frank, James, Heather and Samantha; his great-grandchildren, Francesca, Victoria, Kal-El, Leia, Pippin, Amelia, Kennedy and Ruth Anne; and his great-granddaughters, Isabella and Katelynn. He was predeceased by his daughter, Suzanne Rock; his son-in-law, Frank Ritacco; and his grandson, Philip James “PJ” Rock.

Due to the recent Coronavirus pandemic, private calling hours, a Mass of Christian Burial will be offered at St. Columba Church followed by burial at St. Denis Cemetery.

Donations may be made in Joe’s Memory to St. Vincent de Paul Food Pantry at St. Columba Church. Arrangements are under the direction of the McHoul Funeral Home, Inc. Please visit his Book of Memories at www.mchoulfuneralhome.com.
Read Less

Consider providing a gift of comfort for the family of Joseph Murray by sending flowers.

Posted Mar 19, 2020 at 01:52pm
Steven and Sherry I sent my deepest sympathy to you and your family. I will surely miss say hi to Joe after mass. He will always be in all our hearts. He loved all his family so much. He's now at peace and with his beautiful wife Ruth and in no more pain only with love now. Peace to all of the Murray family. Alice Scalici from 9 am mass everyweek.
Comment Share
Share via:
JM

Posted Mar 18, 2020 at 08:14pm
Uncle Joe, you have left a great big family and a lot of memories. We have all moved on from our little neighborhood in the Bronx but we are all still family. My condolences to all my Uncle Joe’s cousins, their families and all of my other cousins and relatives who have lost a great man, but he will still be with us in our hearts!

Just a childhood memory and probably be silly to hear, but if you can only imagine your uncle showing up every week with a trunk full of Burry’s Fudgetown cookies every week, boy he would get a big hug from a little boy.

Uncle Joe, rest in peace. God be with you and your family!

My sincere condolences on the passing of your dad. A great man who set a wonderful example for all of us with his strong faith. He and Ruth raised an amazing family. You all were truly blessed.. I pray that God has granted him his eternal reward...a place with Him and his angels and his dear wife, Ruth. I wish I could be there for you. You will all be remembered in my prayers.. Stevev and family you did an extraordinary job taking care of Joe. God bless you.. 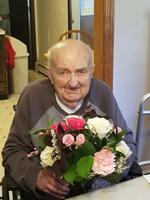