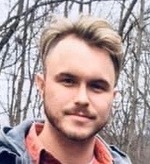 Born in Cortlandt Manor on August 15, 1990, he was the son of Edward Albert Khuns III and Heidi Tepper Khuns. Eddie attended Arlington High School and was employed by Corewood Ventures in Poughkeepsie. He loved being outdoors, hiking, and playing basketball and video games.

In addition to his parents, Eddie is also survived by his daughter, Aabigail Smalley, her sister Charliana Smalley and their mother and his dear friend Katrina Smalley; his sister, Rebecca Khuns, her boyfriend Garret Smith and their daughter Aubrey Smith; his girlfriend Jen Licurse; his best friend, Billy Alden; and many aunts, uncles and cousins. He was predeceased by his grandparents, Edward and Patricia Khuns, and Ursula and Karl Tepper.

Memorial donations may be made to the Alzheimer’s Association.