To share your memory on the wall of Margarita Marquez, sign in using one of the following options:

Margie was born in Mayaguez, Puerto Rico on August 2, 1930. Her family later relocated to New York City, where she was a member of St. Cecilia Church. She worked as a case manager for the Archdiocese of New York at the New York Foundling child welfare agency. She also worked as a teacher’s aide and retired in 1993.

Memorial donations may be made to Memorial Sloan Kettering Cancer Center at www.mskcc.org.

Services are private and under the direction of McHoul Funeral Home of Fishkill, Inc., 1089 Main Street, Fishkill, NY. For online tributes, you can visit Margie’s Book of Memories at www.mchoulfuneralhome.com.
Read Less

We encourage you to share your most beloved memories of Margarita here, so that the family and other loved ones can always see it. You can upload cherished photographs, or share your favorite stories, and can even comment on those shared by others. 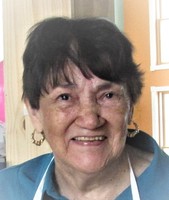