To share your memory on the wall of Guido Capolino, sign in using one of the following options:

Born on December 7, 1929 in Brooklyn, he was the son of the late Sisto and Gaetana Capolino. He graduated... Read More
POUGHKEEPSIE – Guido Remo Capolino, 90, died on May 26, 2020 at Vassar Brothers Medical Center. He previously lived in Brooklyn.

Born on December 7, 1929 in Brooklyn, he was the son of the late Sisto and Gaetana Capolino. He graduated from Lafayette High School in 1946. He proudly served in the US Army during the Korean Conflict. Guido was a lifelong “workaholic” who owned and operated Beacon Roofing for over 45 years and continued to work full time sharing his knowledge and experience as a consultant and manufacturer’s representative.
Guido was a parishioner of St. Mary, Our Lady of the Falls in Wappingers Falls, NY. An avid outdoorsman, he especially enjoyed hunting and fishing continuously from an early age and later sharing his passion with his children, grandchildren and dear friends.
On February 27, 1965 in New York City, he married Patricia Ann Nora “P.A.N.” (O’Donnell) Capolino who survives at home. He is also survived by his children and their spouses, Steven and Michele Capolino of Old Bridge, NJ, Susan and Richard Downing of Milford, PA, Guido and Caroline Capolino of Patterson, NY, Josette and Timothy Colver of Parker, TX, and Remo Capolino and Tara DeTurris of Carmel, NY. He has 14 grandchildren; Kristin Paribello and husband Nicholas, Joseph Capolino, Joseph Black, Jesse Black and wife Nalat, Jillyn Black, John Black, Evan Capolino, Brendan Capolino, Griffin Colver, Jocelyn Colver, Sophia Colver, Peyton Capolino, Parker Capolino, and Marco Capolino. He was also blessed with 3 great-grandchildren; Javyn, Nalyn and Suwyn. He is survived by his sister, Corinne Erard and her husband Phillip of Manhattan, and many cousins, nieces, and nephews across the globe. He is predeceased by his brothers, Ilando, Robert and Eugene.

Due to current restrictions, private entombment will take place at Gate of Heaven Cemetery in Hawthorne. Donations may be made in Guido’s memory to National Geographic Society. Please visit his Book of Memories at www.mchoulfuneralhome.com.

Consider providing a gift of comfort for the family of Guido Capolino by sending flowers.

We encourage you to share your most beloved memories of Guido here, so that the family and other loved ones can always see it. You can upload cherished photographs, or share your favorite stories, and can even comment on those shared by others.

Posted Jul 03, 2020 at 08:34am
So very sorry to hear of “Uncle” Guido’s passing. A dear man, good friend of the family. Linda and I were so glad to have ran into Guido and Aunt P.A.N. at the movie theater. Larry and I were so looking forward to visiting!
God bless and Rest In Peace!
Comment Share
Share via:
KF

Posted Jul 01, 2020 at 04:08pm
Please accept our most heartfelt sympathies for your loss... Our thoughts are with you and your family during this difficult time.

Posted Jun 12, 2020 at 02:46pm
The world is a little less bright without Guido's smile and wit to bring light and wisdom to those whom knew him and worked with him. My condolences

Posted Jun 11, 2020 at 01:08pm
We miss our great "outlaw". Big Guido had great integrity, loyalty, generosity, and showed responsibility at the highest level.He was a great friend to us and we appreciate his support of our daughter.
Comment Share
Share via:
GC

Posted Jun 08, 2020 at 02:24pm
A longterm colleague and grand friend, pivotal in my my gaining understanding of the arcane attributes of roofing, beginning in the mid-'70s. 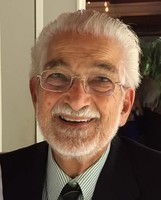 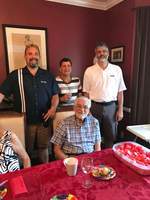 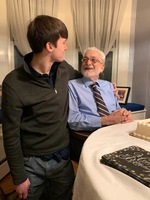