To share your memory on the wall of Lee Banner, sign in using one of the following options:

Print
A memorial service will be announced at a later date.

We encourage you to share your most beloved memories of Lee here, so that the family and other loved ones can always see it. You can upload cherished photographs, or share your favorite stories, and can even comment on those shared by others.

Posted Jun 29, 2020 at 05:53pm
I just watched the video. What a delight. You all love the water!!! Love the old photos of family and your wedding. Thank you for sharing your special memories.
Comment Share
Share via:
B

Posted Jun 29, 2020 at 04:19pm
6/29/20 Joyce, Andrew and Lee's extended family and friends; I am so very, very sorry to learn of Lee's passing. I pray that God will comfort each and everyone of you. Lee and I were neighbors in Barrington, NJ. I met Lee when I was in 6th or 7th grade. A life long friend, one of the nicest persons I have ever known. Although we didn't stay in touch as much (in retrospect) as I wish we had, I have never forgotten Lee and the good times we had together as kids. Lee visited me some years ago and we talked via phone on May 8th for about an hour. I still have the last three emails from Lee in my inbox, where they will remain for the foreseeable future. I learned of Lee's passing on 6/25/20. I apologize for taking so long to write this, but even now I've had to stop a number of times to clear the tears so I could see what I was typing. Joyce, if you can access Lee's email, I have a small mystery I would like to relay to you. Lee was and will always be remembered as one of the really nice guys. I offer my most sincere condolences to you, Joyce and Andrew and to your extended family and friends. Proud to call Lee a friend. Buzz
Comment Share
Share via:
JC

Posted Jun 27, 2020 at 04:34pm
To Joyce and Andrew and all of Lee's loved ones , I am so sorry that he is gone.
Lee and I became acquainted in his senior year of high school (my junior year), when I asked his best friend to take me to the Prom. Lee was very encouraging of that relationship, and while it didn't last, my friendship with Lee did. We would walk part way home from school together and get into some lengthy conversations about anything and everything.I was fascinated with his vast knowledge and interests.
We lost touch for many years but reconnected on Facebook about 15 years ago. Knowing that I was a nurse, Lee regularly sent cartoons or clippings about how great nurses are and how hard we work. I will sadly miss hearing from him. He was one of the good guys! Rest in peace, dear Lee!
Comment Share
Share via:
A

Posted Jun 25, 2020 at 02:24pm
My condolences on the passing of your father Andrew. You and your family are in my thoughts and prayers. 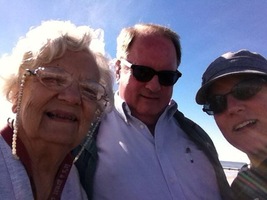