To share your memory on the wall of Maria Concetta Pellerito, sign in using one of the following options:

Print
WAPPINGERS FALLS – Maria Concetta Pellerito, 93, a resident of Wappingers Falls since 1994, died on June 15, 2020 at the Wingate at Dutchess.

Born in Palermo, Sicily, Italy on August 12, 1926, Maria Concetta was the daughter of the lat... Read More
WAPPINGERS FALLS – Maria Concetta Pellerito, 93, a resident of Wappingers Falls since 1994, died on June 15, 2020 at the Wingate at Dutchess.

Born in Palermo, Sicily, Italy on August 12, 1926, Maria Concetta was the daughter of the late Gaetano and Rosa (Riccobono) Enea. On July 30, 1950 in Palermo, she married Antonio Pellerito who predeceased her on June 13, 2004. Maria Concetta worked as a dietary technician for Providence Rest in the Bronx until her retirement.

She is survived by her children, Rosaria and her husband Salvatore LoSardo of East Fishkill, Filippo Pellerito and his wife Venera of Poughkeepsie, and Gaetano “Tom” Pellerito of Wappingers Falls; her 7 grandchildren; 10 great-grandchildren; her sister, Josephine Enea; and many nieces and nephews. In addition to her husband and parents, Maria Concetta was also predeceased by her daughter, Rosita Pellerito and 3 siblings.

A private Mass of Christian Burial will be held at St. Columba Church in Hopewell Junction followed by burial at St. Denis Cemetery.

Donations may be made in Maria Concetta’s memory to St. Jude Children’s Research Hospital. Arrangements are under the direction of the McHoul Funeral Home, Inc. Please visit Maria Concetta’s Book of Memories at www.mchoulfuneralhome.com.
Read Less

Consider providing a gift of comfort for the family of Maria Concetta Pellerito by sending flowers.

We encourage you to share your most beloved memories of Maria Concetta here, so that the family and other loved ones can always see it. You can upload cherished photographs, or share your favorite stories, and can even comment on those shared by others.

Posted Jun 18, 2020 at 05:04pm
So sorry for your loss, she was so very special to those from the Legion of Mary who brought her to Mass or our Communion Service every Sunday. God Bless, Jane Walker
Comment Share
Share via: 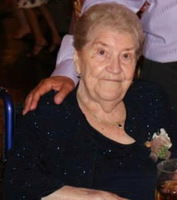