To share your memory on the wall of Elizabeth Portman, sign in using one of the following options:

Print
Elizabeth F. Portman, 92, a lifelong area resident, passed away peacefully on June 19, 2020 at her home.

Known to everyone as “Lib” or “Libby”, she was born on April 3, 1928 in Carmel, NY and was the daughter of Norman and Bertha (Metcalfe) Van Anden.

Lib graduated with her BA from Syracuse University in 1949. It was at Syracuse where she met Henry J. (“Bud”) Portman. Lib and Bud were married on April 3, 1950, at St. Andrew’s Church in Poughkeepsie, NY. Bud was her stalwart husband of 44 years until his passing on August 6, 1994. It was also at Syracuse where Lib and Bud met their friends known as the “Syracuse Gang”, who remained their cherished friends through the ensuing decades.

An early devotee to the RV, Lib travelled extensively with her family throughout the United States, claiming to have stepped foot in all the “lower 48 States.” For a few years, Lib actually drove the RV as her transportation to and fro her teaching job at Myers Corners. It was through “camping” that Lib and Bud met their friends known as the “Pawling Gang”, who remained their cherished friends through the ensuing decades.

Lib also travelled throughout Europe, the Mediterranean, and the Middle East. She always wanted to see the Pyramids, and she did. She got a kick out of travelling under her Irish passport and the nod it gave to her Irish roots. As a lover of geography, she always kept a World Atlas at her side for reference. She would create challenging quizzes involving little-known and unique geographical facts, and most times she would stump those who were brave enough to undertake her challenge.

Most of her Summers were spent on Cape Cod, where she played hostess to friends and family, including many years for her mother, Bertha, and Bud’s great aunt, Louise Paquet, with Lance playing bartender providing the ladies with their Happy Hour pitcher of whiskey sours. During these Summers, Lib and Lance interchangeably referred to each other as Alf and Ralph from the “Green Acres” TV show in performing ad hoc and barely competent maintenance and repairs to the cottages.

Lib was a faithful and active 70-year member of her beloved Order of the Eastern Star (OES), the world’s largest fraternal organization which admits both women and men to membership. OES makes substantial charitable donations to Alzheimer’s disease research, juvenile diabetes research, juvenile asthma research, and provides support to Masonic and/or Eastern Star retirement centers and nursing homes. She devoted immeasurable time and much passion to the organization, holding virtually every office at the local and statewide levels. She had the honor and privilege of serving for the entire year of 1993 as the Grand Matron for the State of New York, a duty which she performed with boundless zeal.

Survivors include her sons, Brett Portman of Clovis, NM, and her devoted caregiver, Lance Portman, and his wife Donna, of Hopewell Jct., her beloved grandchildren, Quincy and Paul Portman, and several nieces, nephews, and cousins.

Lib is now reunited with Bud and resting in peace next to him at the Hopewell Cemetery, Hopewell Junction, NY.

Memorial donations may be made to a charity of your choice. Please visit Elizabeth’s Book of Memories at www.mchoulfuneralhome.com.
Read Less

Consider providing a gift of comfort for the family of Elizabeth Portman by sending flowers.

Posted Jun 28, 2020 at 07:22pm
I am so sorry to hear of Libby’s passing. She was my dear mentor as a beginning first grade teacher at Myers Corners, and was happy to share her wonderful wisdom about anything related to first grade, and sometimes life!
I have many happy memories of summer vacation rentals in the charming little cottage in Wareham. She awakened my love for Cape Cod, which endures to this day. I will miss her terribly.
Sincerely,
Ginny Marcus
Ginny
Comment Share
Share via:
CD

Posted Jun 28, 2020 at 10:39am
I was so saddened to hear of Libby's passing. I worked with her for many years at Myers Corners. She was a mentor and friend whose advice was always welcome to those of us who were new to the teaching profession. She had a calmness to her which could always make a difficult situation bearable. Her laugh was infectious. She loved the children she taught and made their environment safe and interesting. She will be missed by all of those who knew her.
Comment Share
Share via:

Posted Jun 28, 2020 at 09:29am
My sincere condolence to all of Libby's family at this difficult times. Lib was a very lovely lady who spoke the truth but didn't speak ill of anyone. During my traveling time in the OES, she was one of our great leaders. May many fond memories of years gone by help to soothe her family members and close friends. She is with Bud now and I am sure they are traveling together once again.
Most sincerely,
Roberta Meissner
Comment Share
Share via: 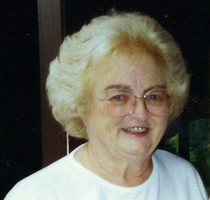