To share your memory on the wall of John Speirs, sign in using one of the following options:

He was born in the Bronx on August 29, 1930 and lived there until 1970 when the family moved to Wappingers Falls. He was predeceased by the love of his life, his wife, Joan. They were married 57 years. He was also predeceased by his parents, Dorothy and John Speirs, and his step-father, Tim D'Amico. He is survived by his brother, Donald, as well as his daughters, Marion Speirs (Neil Connelly), Jacqueline Thorpe (Richard-deceased), and Stacy Ann Deneve (Frank Coppola). He is also survived by his eight grandchildren: Patrick (Nahyla) Thorpe, Michael (Sharlie)Thorpe, John (Liz McCluskey) Thorpe, Jeannette Thorpe, Brett Deneve, Jacob Lomasney, Megan Lomasney and Alexander Lomasney. He was also blessed with seven great-grandchildren.

Jack joined the Navy when he was 17 and fought in the Korean War where he served as a Corpsman. On returning home, he joined the NYPD for a few years and then became a NYC Firefighter. He was proud to serve the City and its citizens. He worked his way up to Captain before retiring. Upon retiring, he discovered a love of golf which he played for several years.

Drawing on his love for being a Corpsman in the Navy, he entered Dutchess Community College for a nursing degree and worked at several area medical facilities. He was very active with the Marine Corps League in Beacon and the Gathering of Eagles on Rt. 9 in Wappingers. He and "his Joanie" traveled to several places in the USA, enjoying their time together.

A private service will be held for the family at a future date. Arrangements are under the direction of the McHoul Funeral Home, Inc. Please visit Jack’s Book of Memories at www.mchoulfuneralhome.com.
Read Less 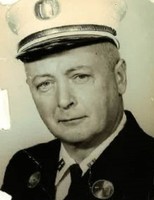