To share your memory on the wall of Julio Possenti, sign in using one of the following options:

Born on February 15, 1932 in Bedford Hills, Julio was the son of Ludovico and Josephine (Marchigiani) Possenti. On February 17, 1976, Julio married Patricia Maestry, who survives at home in Florida.

Julio was a Criminal Investigator for the New York State Police for 23 years until his retirement in 1979. After his retirement from the State Police, he became a Special Agent/Organized Crime Task Force for the United States Attorney’s Office, Southern District.

Julio was an avid Yankees fan, which he shared with his youngest son, Justin. They would talk on the phone about who was winning and the great plays in the game. Julio enjoyed watching his son Mickey in Body Building competitions and was always there to cheer for him. Family was everything to him even until his death. He enjoyed watching his family grow and thrive especially the grandchildren/great grandchildren. Anyone that knew him would tell you that he was a man with a purpose who was always on time, except when his wife would make him late (which was always). He will be missed by many especially his family.

Consider providing a gift of comfort for the family of Julio Possenti by sending flowers.

We encourage you to share your most beloved memories of Julio here, so that the family and other loved ones can always see it. You can upload cherished photographs, or share your favorite stories, and can even comment on those shared by others.

Posted Jul 08, 2020 at 06:40pm
"Julio Possenti" will remain in our hearts forever. This tree is a living tribute to his strength and determination.

Posted Jul 03, 2020 at 10:13am
We met Julio and Pat in 2011 when we met them in our church Our Lady of Hope in Port Orange Fl. We have enjoyed their friendship since then. He was a funny but serious guy. We will miss him sitting in the pew with us on Sunday and going to breakfast with us when he felt up to it. God speed Julio we will miss you. Our thoughts and prayers are with Pat and the family always.. Bev and Steve Fulwider of PORT Orange Fl.
Comment Share
Share via: 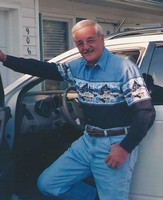