To share your memory on the wall of Helen Fuimarello, sign in using one of the following options:

Print
WAPPINGERS FALLS - Helen Fuimarello, 93, once called the “grande dame of constituent services” for her dedicated work in federal, state and local government offices in the Hudson Valley, died peacefully on Monday, July 20, 2020 at Kaplan Family H... Read More
WAPPINGERS FALLS - Helen Fuimarello, 93, once called the “grande dame of constituent services” for her dedicated work in federal, state and local government offices in the Hudson Valley, died peacefully on Monday, July 20, 2020 at Kaplan Family Hospice Residence in Newburgh.
Born on August 21, 1926 at Vassar Hospital in Poughkeepsie, Helen was the daughter of Evangeline and Procopis Labrinos. She spent most of her life in Dutchess County, maintaining close bonds with family and friends. She graduated from Poughkeepsie High School in 1946 and she was a member of the Kimisis Greek Orthodox Church in Poughkeepsie. Helen graduated from the Jersey City Medical Center in 1952 and became a registered nurse. Early on, she was employed at St. Francis Hospital in Poughkeepsie.
She lived almost her entire adult life in Wappingers Falls, where she raised her son, Tom, the apple of her eye. Family meant everything to Helen, and she was thrilled when she became a grandmother in 2011, with the birth of her granddaughter, Julia.
Throughout her life, Helen was dedicated to caring for others and fighting for their rights. Her longtime career in public service began in 1969 when she worked as District Office Manager for Congressman Hamilton Fish, Jr. in the 19th Congressional District. She proudly held the position for 26 years and was best known for providing exceptional constituent service. No case was too small, no voice was unheard; every constituent mattered. Helen handled all matters equally, whether it was a complicated immigration challenge, or a skunk trapped in a widow’s garage.
Helen mentored countless interns in the District Office each summer, instilling in them a sense of pride and a deep interest in politics. Helen insisted they keep a clean desk, answer phones on the first ring, and take initiative. Many interns maintained ties with her well past college and throughout their careers.
When Congressman Fish retired in 1994, Helen continued to serve the constituents of the 19th District in 1995 by remaining District Office Manager for Congresswoman Sue Kelly. In 1996, New York Senator Steve Saland asked Helen to join his District Office team. Fifteen years later she would look back on her time with the Senator with distinction and great affection. Her colleagues in the Senate office remained life-long friends.
Helen served on the Grinnell Library Board in Wappingers Falls for 51 years, both as member of the board and president. Similarly, she served on the Dutchess County Board of Health, both as board member and president, for 38 years. For 14 years, she was a member of the Board of Trustees for the Samuel F.B. Morse Historic site in Poughkeepsie.
She was a Republican Committeewoman for the Town of Wappinger and Dutchess County for over 50 years. And for 13 years, Helen served as a Delegate to the 9th Judicial Conference and 97th Assembly District. She was a past Secretary for the Dutchess County Republican Executive Committee and was appointed by Senator Sue Serino as an Advisory Member of the Committee on Aging.
The loving mother, grandmother, sister and aunt is survived by her son, Tom Fuimarello of Rhode Island; her granddaughter, Julia Fuimarello of Rhode Island; her sister, Mary Charkalis, of Fishkill; her brother, Lou Labrinos of Poughkeepsie; her niece, Sally Craft and her husband, Terry Craft of Walden; her nephew Alex Labrinos and his wife, Bethany of Virginia; and her nephew, Peter Charkalis and his wife, Diana, of California.
Calling hours will be held from 2 to 5 p.m. on Sunday, July 26 at the McHoul Funeral Home of Fishkill, Inc., 1089 Main Street, Fishkill.
A funeral service will be held at 10 a.m. on Monday, July 27 at Kimisis Tis Theotokou Greek Orthodox Church, 140 South Grand Avenue, Poughkeepsie. Interment will be private.
PLEASE NOTE: In compliance with NYS guidelines, social distancing and face masks will be required and capacity may be limited. All attendees should be prepared for potential extended waiting periods.
In lieu of flowers, donations may be made to Kimisis Greek Orthodox Church; Kaplan Family Hospice Residence (c/o Hospice of Orange & Sullivan Counties), 800 Stony Brook Court, Newburgh, New York 1255 (www.hospiceoforange.com); or Friends of Grinnell Public Library, 2642 East Main Street, Wappingers Falls, NY 12590.
For online tributes, you can visit Helen’s Book of Memories at www.mchoulfuneralhome.com.
Read Less

Consider providing a gift of comfort for the family of Helen Fuimarello by sending flowers.

We encourage you to share your most beloved memories of Helen here, so that the family and other loved ones can always see it. You can upload cherished photographs, or share your favorite stories, and can even comment on those shared by others.

Posted Jul 27, 2020 at 11:12am
Helen was the most wonderful friend......always lent an ear.....always wise and compassionate! She will be forever missed by those that were fortunate enough to call her a friend!
Comment Share
Share via:
AR

Posted Jul 26, 2020 at 12:19pm
i was fortunate enough to know Helen for over 45 years. Simply put, she was a a wonderful person, always available to help anyone in any way she could. Many years ago when my youngest son was an infant, he suffered from an extreme case of colic. The doctor's prescribed a specific infant formula which was soon taken off the market for lack of sales. Out of desperation we turned to Helen ( who was assistant to Ham Fish ) for help. I don't know how she did it , but she got the drug company to send us the formula from California free of charge. She had a magic way of dealing with people. She will be long remembered for the beautiful person she was. AL ROBERTS
Comment Share
Share via:

Posted Jul 24, 2020 at 04:45pm
Evelyn and I were fortunate to have known Helen, if only slightly. She was truly an inspiration in how to devote one's energies to the public good, while having fun doing it! She had many tales of her wide experiences, and she was never reluctant to share these with you. She will be missed!
Comment Share
Share via:
DP

Posted Jul 23, 2020 at 10:17pm
To the family and friends of Helen,
She lived an exemplary life of grace, wisdom, compassion and patriotic participation. She will be deeply missed by all whose lives she touched. Our benefit and our loss, with deepest sympathy,
Dutchess County Independence Party
Comment Share
Share via:
CP

Posted Jul 23, 2020 at 03:44pm
Helen was a wonderful woman. I remember her from the many meetings when she was active in the political world, Condolencess to the family. Charlotte Poillucci
Comment Share
Share via: 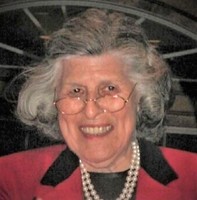