To share your memory on the wall of Peter Buchner, sign in using one of the following options:

Peter is survived by his life partner of 30 years, Carol Place; his daughters, Grace Giaccone and Casandra McGarty; and son, Peter Buchner. He also has three grandchildren and three great-grandchildren.

Peter served in the United States Navy from 1956-1958 as a Ship Fitter (Pipe Fitter) on the USS NOA, a destroyer. He was deployed to Japan and Panama, home ported in Norfolk, VA. After the Navy, he worked with Slant Fin in Glen Cove, NY for 42 years, retiring in 2001 to his weekend home in Dutchess County.

A graveside service will be held on Thursday at 12pm at Freedom Plains Cemetery.
Read Less

Consider providing a gift of comfort for the family of Peter Buchner by sending flowers. 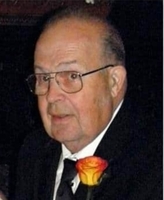