To share your memory on the wall of Lawrence McNeight, sign in using one of the following options:

Born in Buffalo on August 16, 1944, he was the son of Harold and Elizabeth (Aiken) McNeight. He proudly served our country i... Read More
MOUNT PLEASANT, SC – Lawrence Robert “Mac” McNeight, 75, formerly of Poughkeepsie, died on July 25, 2020.

Born in Buffalo on August 16, 1944, he was the son of Harold and Elizabeth (Aiken) McNeight. He proudly served our country in the US Army during the Vietnam War. As a Spec 5 Sergeant, he built a chapel in Vietnam with twenty fellow soldiers and defended our country, capturing many enemies. During his time as a New York State Trooper, he proudly served on the Scuba Diving Team as a unit patrol of Troop K.

Following his retirement from the police force, Mac worked as a Heavy Duty Mechanic and Crane Operator for ECCO Enterprises in Yonkers for 20 years before retiring in 2006. He was a member of Local 137, Union of Operating Engineers.

Consider providing a gift of comfort for the family of Lawrence McNeight by sending flowers.

We encourage you to share your most beloved memories of Lawrence here, so that the family and other loved ones can always see it. You can upload cherished photographs, or share your favorite stories, and can even comment on those shared by others. 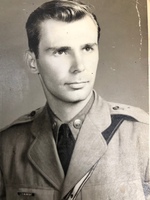