To share your memory on the wall of Thomas Dolan, sign in using one of the following options:

Born October 24, 1943 in Flushing, Queens, Tom was the loving son of Helen (née Hannigan) and Joseph Dolan. Much of his life was spent cultivating a love of the outdoors, first with his father, and later with his wife, children, and grandchildren. Tom’s family spent many summers in their family cabin at Lake Walton, lifeguarding and enjoying shenanigans with those who would become lifelong friends. He was introduced to the love of his life, Barbara (née Nuesell) Dolan, and they enjoyed 50 years of a fantastic love story together beginning April 6, 1968.

Thomas strongly valued education. He earned his undergraduate degree at Fordham University, and earned his juris doctorate at St. John’s Law School.
Thomas had a strong desire to serve his country. He joined the Army in 1965, earning the rank of Captain while serving as Judge Advocate General. He earned several awards and commendations during his service, including two Bronze Stars in Vietnam.

In 1973, Thomas was honorably discharged, and moved back to Dutchess County, where service to his community continued. He accepted a position in the Dutchess County District Attorney’s Office as an assistant district attorney and later, Bureau Chief. His tireless efforts were part of a wonderful team of men and women devoted to advocating for victims and their families.

Thomas was elected to the Dutchess County Court in November 1992, where he served a short time in family court, and then as both County Court Judge and Acting State Supreme Court Justice. His Court handled a number of high profile cases, where he meted out justice in a fair but firm fashion, earning him the affectionate moniker of “The Hanging Judge” by those with whom he served until his retirement in 2010.

While Thomas was a strong, loyal Republican in his beliefs, he worked well with, and respected and was respected by members of other parties and belief systems. Once asked how he could pass judgement on others, he merely replied he wasn’t the One qualified to pass judgment on people, only on the behavior that brought them to his courtroom. His strong faith made him humble, kind, and loyal.

The loving husband, father, and grandfather is survived by his daughters, Claire Morgan and Claudia Dolan-Heckert, grandchildren Conor and James Morgan and Kevin, Sean, and Emma Heckert. He was predeceased by his wife, Barbara, in 2019.

Calling hours will be held from 1 to 5 pm on Saturday, August 1 at the McHoul Funeral Home, Inc., 895 Route 82, Hopewell Junction. A service and military honors will begin at 5 pm, and will be live-streamed for those unable to attend in person.

PLEASE NOTE: In compliance with NYS guidelines, social distancing and face masks will be required and capacity may be limited. All attendees should be prepared for potential extended waiting times.

In lieu of flowers, donations may be made to either the Wounded Warrior Project or the Disabled American Veterans, both causes dear to Thomas’s heart. Please visit Tom’s Book of Memories at www.mchoulfuneralhome.com.
Read Less

Consider providing a gift of comfort for the family of Thomas Dolan by sending flowers.

Posted Aug 02, 2020 at 08:02pm
Claire and Claudia:
Our deepest sympathy. We have known your father for many years—when he was in the DA’s Office and later as a judge. He never failed to ask about the family and was always sincerely interested in the answer. He was fair, kind and had a down to earth demeanor in his dealings with everyone. His service to the community has left it a better place. He will be missed.
With Sympathy,
Stanley and Mary Ellen Still
Comment Share
Share via:
CS

Posted Aug 01, 2020 at 01:06pm
I met Tom over 70 years ago at Lake Walton. Our parents both had cabins there and we spent many summers fishing, hiking and swimming together. Years later we both agreed that they were wonderful years. Each season culminated in a huge Labor Day party in which all of the resident families participated. It was obviously a great foundation for Tom's exemplar future career. My love and sincere condolences to his family . Christian Starpoli
Comment Share
Share via:
LD

Posted Jul 31, 2020 at 02:42pm
My co-workers used to say “You have the best job in the court system”, and they were absolutely right. Every day for over 17 years it was
the best job I ever had, as senior court clerk to Hon. Thomas J. Dolan. Once a defendant appearing before him asked “Judge, you know what they say about you up at the jail?” Judge Dolan, amused, said “No, what do they say about me up at the jail?” “They say you’re tough but fair” said the defendant.
And he was. Tough but fair, with a big soft heart underneath for children. I will miss him dearly, and send my love to Claire, Claudia and their families.
Comment Share
Share via:
JL

Posted Jul 30, 2020 at 10:56pm
Dear Claire and Claudia,
Please accept my sincere condolences. Tom was my supervisor when I worked at the DA's office. He was a great mentor and role model. His door was always open to share his philosophy on life, and one or two "Dolanisms". He instilled in many of the younger ADA's , a sense of civic duty, integrity and commitment to family.

Cherish his memories and know that he was beloved by all.

Posted Jul 30, 2020 at 05:38pm
I'm sorry to hear of Judge Dolan's passing. When I was in the Public Defender's Office with him when he was a Bureau Chief in the DA's Office. Later I represented client's before him when he was a judge. He could could be tough but he always treated me and my clients with respect. My condolences go out to his family, friends, and former colleagues.
Comment Share
Share via: 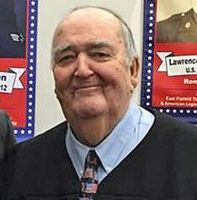