To share your memory on the wall of Christopher Watson, sign in using one of the following options:

Print
Christopher I. Watson, 37, a resident of Brookfield, CT and formerly of New Milford, Denver and Groton, died on July 31, 2020.

Born in Waterbury, CT on December 6, 1982, he was the son of Robert Noble and Anne Watson Noble. Chris had wor... Read More
Christopher I. Watson, 37, a resident of Brookfield, CT and formerly of New Milford, Denver and Groton, died on July 31, 2020.

Born in Waterbury, CT on December 6, 1982, he was the son of Robert Noble and Anne Watson Noble. Chris had worked as an installer for Overhead Doors in Danbury, CT. He enjoyed snowboarding, motorcycle riding, baking, wire wrapping, kombucha making, tie dying, and music and festivals, along with many others.


“Be the love…written on three fingers!!! That was one of your many mantras, you were just that on your best days!

Like and loved by so many, your plethora of friends you made along your adventurous journey…what a gift you had to be able to connect with anyone…you may not even have known it, but you made people better. You could talk about anything as it related to life…ranging from the most basic topics like a simple kombucha recipe, to the injustice of those in concentration camps…You had a true hippie soul, mad genius too.

A gentle spirit, creative, intelligent, and talented, just a few of your many ways. That’s how those who loved you will remember you.

You lived your life one foot in reality and the other on the wild side pushing the limits, pushing your own limits. So unafraid and unphased and unapologetic to public opinion.

You left a lot behind, and who knows if you ever felt deserving of all you had but you were. May you rest easy and cheers to baking the world.”
Read Less

We encourage you to share your most beloved memories of Christopher here, so that the family and other loved ones can always see it. You can upload cherished photographs, or share your favorite stories, and can even comment on those shared by others.

Posted Aug 05, 2020 at 07:22pm
I met Chris when we were in Mrs. Bonapace’s class together in 2nd grade. Even when we were that young, he taught me that being honest and vulnerable about your struggles makes you strong. He taught me to listen and try to understand where people are coming from. Fast forward to middle school, I treasure the memories of times we spent with friends at the Candlewood Shores beach as formative and exciting. Later, after high school when he was working at Burritoville on federal road, he’d always give me an obscenely large portion of guacamole. I’ve always admired his sweet, rebel spirit, and still do. My condolences & love to his family.
Comment Share
Share via:
NS 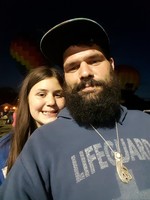