To share your memory on the wall of Rocco Guida, sign in using one of the following options:

Rocco was born in Valle Dell’Angelo, Italy on October 20, 1955, to his father Francesco Guida and mother Filomena Guida. The oldest of three sons, Rocco loved being outdoors and working with his hands. He ran many successful businesses: at first, Guida’s Ristorante with his two brothers; and most recently, Avanti’s Restaurant with his sister-in-law, Angela.

He was a caring father and PeePaw, who loved his family with every bit of his heart. Rocco is survived by his wife, Paula Guida; his children, Melissa Guida-Richards and Rocco Guida Jr.; his grandchildren, Carlito Richards and Killian Richards; his parents; his brothers, Luigi Guida and Carmelo Guida; his son-in-law, Charles Richards II; and his mother-in-law, Maria Correia; as well as many other loving relatives & friends.

Calling hours will be held from 2 to 5 p.m. on Sunday, September 13 at the McHoul Funeral Home of Fishkill, Inc., 1089 Main Street, Fishkill. A Mass of Christian Burial will be offered at 10 a.m. on Monday, September 14 at St. Mary, Mother of the Church, 106 Jackson Street, Fishkill. Entombment will follow in the Community Mausoleum at Fishkill Rural Cemetery. All are welcome to attend - Please note: In compliance with NYS guidelines, face masks and social distancing will be required, and capacity may be limited.

For online tributes, you can visit Rocco’s Book of Memories at www.mchoulfuneralhome.com.
Read Less

Consider providing a gift of comfort for the family of Rocco Guida by sending flowers.

We encourage you to share your most beloved memories of Rocco here, so that the family and other loved ones can always see it. You can upload cherished photographs, or share your favorite stories, and can even comment on those shared by others.

Posted Sep 11, 2020 at 04:07pm
I hope heaven is waiting for you, Rocco with open arms. Your light here on earth set but now your light will shine in paradise. We will miss you; our conversations on what interests you, reminiscing about our past in Italy and of course, your cooking.
Our sincerest condolences. May Rocco Rest In Peace. ✝️ 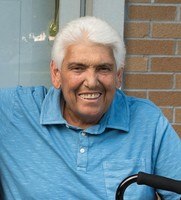