To share your memory on the wall of Araceli Rodriguez, sign in using one of the following options:

Print
LAGRANGEVILLE – Araceli Rodriguez, 78, died peacefully on September 14, 2020 at her home surrounded by her family.

Born in Jayuga, Puerto Rico on December 5, 1941, she was the daughter of Julia Melendez. Araceli had worked as a salesp... Read More
LAGRANGEVILLE – Araceli Rodriguez, 78, died peacefully on September 14, 2020 at her home surrounded by her family.

Born in Jayuga, Puerto Rico on December 5, 1941, she was the daughter of Julia Melendez. Araceli had worked as a salesperson for Community Opticians in the Bronx. An area resident since 1996, she previously lived in the Bronx.

Araceli is survived by her children, Mark Rodriguez, Nora Quinones and her husband Edward, Anthony Rodriguez and his wife Dennise, and Sandra Rodriguez; her grandchildren, Jennifer, Edward, Anthony, Dialise, Mario, Araceli, Nicholas, Antecia, Mariona and Marci; her great-grandchildren, Gennara, Lillianna, Kieron, Flora, Emelya, Juliette and Cassandra; and her siblings, Celia “Sally”, Eddie and Linda. She was predeceased by her siblings, Jackie, George and John.

Calling hours will be held on Friday from 4-8pm at the McHoul Funeral Home, Inc., 895 Route 82, Hopewell Junction. The Funeral Service will be on Saturday at 10am at the funeral home followed by entombment in Fishkill Rural Cemetery.
Read Less

Consider providing a gift of comfort for the family of Araceli Rodriguez by sending flowers.

We encourage you to share your most beloved memories of Araceli here, so that the family and other loved ones can always see it. You can upload cherished photographs, or share your favorite stories, and can even comment on those shared by others.

Posted Sep 23, 2020 at 07:09pm
We are the branches of Araceli Rodriguez. She will be missed tremendously. Our love for her is everlasting. Her legacy will continue through us.

Posted Sep 19, 2020 at 07:55pm
Ada was our neighbor and such a sweetie to talk to when ever we had the privilege to share a conversation. She also loved our dog Ebony. We will miss her.
Regina and Doug
Comment Share
Share via:
RO

Posted Sep 18, 2020 at 04:20pm
I want so badly to be with you. My heart is with you so much. Today and always. I hope this tree carries on a legacy of love and strength like Ara's.

Posted Sep 18, 2020 at 09:05am
I will never forget the day when I met my dear friend Aida (the way I use to call her)) when I was walking on the street with my son John who was one year old in his stroller and just before I entered the building where I lived I heard Someone whisper (hello) and there she was, Aida looking out her window, she had just moved in. I remember her asking me what floor did I live on and I said the third floor and she said WOW! me too. She had this beautiful curly, dark hair, beautiful smile but the thing I remember the most were her beautiful white teeth.I remember one day joking with her I asked her, do you use ajax on those choppers and she started laughing out loud.Any way when I got to the 3rd floor she was standing there and she pointed to her apartment and asked me, would you like to be my friend? and I said yes. From that day on she because not just my only friend but my best friend for life. She also became my confident and my sister from that moment on, then later she also became my daughter's godmother. We became friends on that day and will be friends forever.R.I.P my dearest friend. Love you always and forever.
Comment Share
Share via: 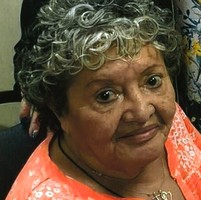