To share your memory on the wall of Joseph Manz, sign in using one of the following options:

Born in Romania on August 6, 1930, he was the son of Joseph and Rosalia (Moor) Manz. A member of the International Union of Bricklayers and Allied Craftworkers, Joseph was employed as a mason by R.W. Ciferri, Inc., in Millbrook for many years. He was also a member of the Germania Club, and the Beekman and Union Vale Senior Citizens.

On April 22, 1961 in the Bronx, Joseph married Erna Lagler who survives at home. He is also survived by his daughter, Evelyn Doerr and her husband Kenneth; his son, Edmund Manz; his granddaughter, Monica; and his brothers-in-law, sisters-in-law, nieces and nephews in Germany, Austria and the United States. 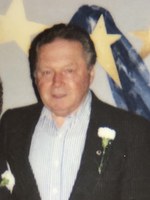