To share your memory on the wall of Ann Mercurio, sign in using one of the following options:

Print
EAST FISHKILL – Ann Rita Mercurio, 89, an area resident since 2004 and formerly of New Rochelle, died peacefully at her home surrounded by her family on October 8, 2020.

Born in the Bronx on April 3, 1931, she was the daughter of Charl... Read More
EAST FISHKILL – Ann Rita Mercurio, 89, an area resident since 2004 and formerly of New Rochelle, died peacefully at her home surrounded by her family on October 8, 2020.

Born in the Bronx on April 3, 1931, she was the daughter of Charles and Emma (Voltz) Leser. Ann was employed as a Licensed Practical Nurse at New Rochelle Hospital for many years. She also worked in the office of Dr. Wing. Ann was a parishioner of St. Columba Church, and was a member of the East Fishkill Seniors. She enjoyed reading, traveling, knitting, crocheting, cooking and playing cards, but more than anything, she cherished time with her family.

Memorial donations may be made to Meals on Wheels of Greater Poughkeepsie, 100 Cannon Street, Poughkeepsie, NY 12601 or www.mealsonwheelsofgp.com. Please visit Ann’s Book of Memories at www.mchoulfuneralhome.com.
Read Less

Consider providing a gift of comfort for the family of Ann Mercurio by sending flowers.

We encourage you to share your most beloved memories of Ann here, so that the family and other loved ones can always see it. You can upload cherished photographs, or share your favorite stories, and can even comment on those shared by others.

Posted Oct 13, 2020 at 05:05pm
Ann was a very caring and kind person and I was blessed to have known her.
Judy Katz
(Wiccopee Firehouse)
Comment Share
Share via:
EA

Posted Oct 09, 2020 at 06:45pm
A part of us went to heaven with you. Life will never be the same. We will miss you every second of everyday. Rest peacefully Grandma Gigi. Love Emma, Fred, Mia, Celine, Gianna
Comment Share
Share via: 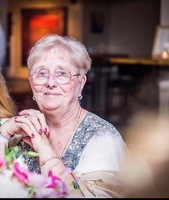