To share your memory on the wall of Vince Skrapits, sign in using one of the following options:

Born in Szentpéterfa, Hungary in 1936, he was one of twelve children of Ferencz and Maria (Jany) Skrapits. Vince wa... Read More
EAST FISHKILL - Vince Skrapits, 84, died peacefully at his home on October 25, 2020 surrounded by his loving family.

Born in Szentpéterfa, Hungary in 1936, he was one of twelve children of Ferencz and Maria (Jany) Skrapits. Vince was employed as a carpenter with NY District Council of Carpenters Local #246. He was a parishioner of St. Columba Church, and was a member of the St. Peter and Paul NY Association.

On January 23, 1960 in Eastern, PA, Vince married Jolan who survives. He is also survived by his daughters and their husbands, Barbara and Francis, and Anna and Christopher; his grandchildren, Patrick (and Deirdre), Vincent, Anna, Daniel, Matthew, and Julianna; his great-granddaughter, Amelia; his siblings, Erzsebet, Anna, Karoly, Marton, Janos, and many nieces and nephews. Vince was predeceased by his son, Vincent Anthony, on October 8, 2006 as well as several siblings, Franz, Istvan, Pius, Theresa, Miklos, and Catharina.

A memorial service will be held in the future.
Read Less

Consider providing a gift of comfort for the family of Vince Skrapits by sending flowers.

We encourage you to share your most beloved memories of Vince here, so that the family and other loved ones can always see it. You can upload cherished photographs, or share your favorite stories, and can even comment on those shared by others. 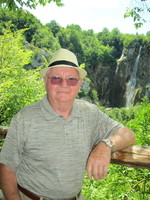