To share your memory on the wall of Robert Regensburg, sign in using one of the following options:

Consider providing a gift of comfort for the family of Robert Regensburg by sending flowers.

Posted Nov 19, 2020 at 10:24am
Ryan and Leezum, and Bob’s family: I am deeply saddened at your loss. Bob touched so many lives during his time with us. He was a quick-witted observer of life and human nature, and he always left me thinking, with a smile, and with optimism for our world. I don’t know many others who faced a serious illness with such determination and tenacity. He will always be an inspiration to me, and all of his former classmates and friends. My thoughts and prayers remain with you, and I hope treasured memories will help you get through this difficult time.
Comment Share
Share via:
B

Posted Nov 18, 2020 at 08:50am
Many great memories visiting and playing together with my cousin Bobby Allen and family on Boston Avenue in Egg Harbor. Soft spoken, intellectual, creative and possessing a wonderful sense of humor, he will be missed by family and friends. How much he sounded and looked like his father. With great sadness I recall the way we were, but the world is a better place because Robert touched each of our lives.
Comment Share
Share via:
DA

Posted Nov 18, 2020 at 07:55am
My thoughts to all of our family and and friends. May wonderful memories fill our hearts during this sad time.
With sympathy,

Posted Nov 18, 2020 at 03:38am
Bobby soul will forever remain amingst us... for it will grace us with it’s wiity sense of humor, intelligent bantir, and wrap it all up with a uncanny amount of genuine warmth and depth of live. I was blessed with your presence here on earth as soooo many were Bob. How fortunate were we. Gids speed my friend.
Comment Share
Share via:
JM

I had the great pleasure of growing up with Bobby in Egg Harbor City as a child. He was much more than a cousin to me- as an only child and mama’s boy— he was a brother to me! He was already active, aggressive, more fun loving and risk taking than me from ages 5-12 that I remember so well. We played “army men” often, helped me be unafraid at monster movies, and attended St. Nicholas school together! He was my best friend! He left with his family for NY after sixth grade—and I missed him so. I stayed in tough thru his high school years— admiring and yearning for the fun and exciting escapades he had that I could only dream of! 50 years later and many missed opportunities to connect— his avid use of social media caught my attention! I was pleased to reconnect for the past 10 years— virtually —but loved to watch his beautiful and talented daughter grow up before my eyes— talk to my aunt and his mom and marvel again after 50 years at all his travels, experiences and accomplishments! See— Bobby hadn’t changed much from that 12 year friend I lost! I wish I could have had a full life like he did! He touched so many people. I will miss him again! Rest In Peace my dearest friend! Watch a rerun of “Star Trek or “Combat” with a glass of wine and one of ur favorite cigars! My deepest condolences to his son, daughter, sisters, wife and friends! 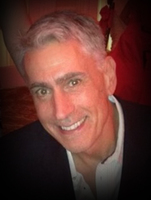