To share your memory on the wall of Anthony Caputo, sign in using one of the following options:

Print
Anthony A. Caputo, a local area resident since 1997 and formerly of the Bronx, died on Tuesday, November 17, 2020 at MidHudson Regional Hospital in Poughkeepsie. He was 61.

He was born in the Bronx on January 18, 1959 to the late Amerig... Read More
Anthony A. Caputo, a local area resident since 1997 and formerly of the Bronx, died on Tuesday, November 17, 2020 at MidHudson Regional Hospital in Poughkeepsie. He was 61.

He was born in the Bronx on January 18, 1959 to the late Amerigo John and Caroline (Costanzo) Caputo. Anthony worked as a truck operator for many construction companies. He was a proud American and loved spending time with his family, he especially loved cheering on his children at their various sporting events. He also enjoyed playing cards, completing model cars, listening to John Lennon, but most of all, he loved being a grandfather.

On November 29, 1985, Anthony married the love of his life, Carmela Amendola in Yonkers. Carmela survives at home in Fishkill.

In addition to his parents, Anthony was also predeceased by his sister, Suzanne Rao; his sister-in-law, Genie Caputo; and his brothers-in-law, Ralph Martucci and Dominick Rao.

PLEASE NOTE: in compliance with New York State guidelines, social distancing and face masks will be required and capacity may be limited. All attendees should be prepared for potential extended waiting periods.

Consider providing a gift of comfort for the family of Anthony Caputo by sending flowers.

We encourage you to share your most beloved memories of Anthony here, so that the family and other loved ones can always see it. You can upload cherished photographs, or share your favorite stories, and can even comment on those shared by others.

3 trees were planted in the memory of Anthony Caputo

Posted Nov 20, 2020 at 10:42am
Anthony's warmth, love, and laughter is forever etched into our memories. The trips , the tournaments, the tornados. Anthony will always hold a special place in our hearts.
With Love,
Bill & Debi
Comment Share
Share via:
KL

Posted Nov 19, 2020 at 06:43pm
Our deepest sympathy and love to Deanna and her family. Keeping your Dad and all of you in our thoughts and prayers
Our Love, Karen and Steve Lines
Comment Share
Share via:

Posted Nov 19, 2020 at 06:13pm
Sincere condolences to Anthony's Family on his passing. May he rest in peace and may Perpetual Light shine upon him.

Posted Nov 18, 2020 at 08:08pm
My father was the best man there was. No matter what mood I was in he always put a smile on my face. His laugh and light would light up the room. No matter who he met, he left a lasting impression. I can go on for days about the things he has done for us, but I promise I will pass on everything he taught me to his grandkids. Oh how he loved Ayla. He loved everyone he met. 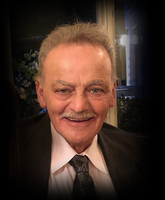