To share your memory on the wall of Elaine Johnson, sign in using one of the following options:

Born on March 24, 1922 in Woodland, ME, Elaine was daughter of August Frederick and Jennie Pauline (Sealander) Erick... Read More
Elaine Edith Johnson, 98, an area resident since 1947 and previously of Worcester, MA, died on January 3, 2021 at home.

Born on March 24, 1922 in Woodland, ME, Elaine was daughter of August Frederick and Jennie Pauline (Sealander) Erickson. On June 21, 1947 in Worcester, MA, Elaine married Everett Malcolm Johnson who predeceased her on November 6, 2003.

She was a member of Fishkill Methodist Church and was an active artist doing oil and watercolor. She enjoyed playing bridge and crafting for charity for decades for her church and Boscobel.

Services will be private at this time and inurnment will take place in Fishkill Rural Cemetery.
Read Less

Consider providing a gift of comfort for the family of Elaine Johnson by sending flowers.

We encourage you to share your most beloved memories of Elaine here, so that the family and other loved ones can always see it. You can upload cherished photographs, or share your favorite stories, and can even comment on those shared by others. 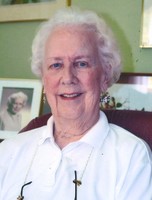