To share your memory on the wall of Lorraine Cohn, sign in using one of the following options:

Lorraine is survived by her children, And... Read More
Lorraine T. Cohn (nee Coder), born on November 8, 1925, passed away peacefully in her home on Thursday, February 11, 2021. She lived for 95 years, 3 months and 3 days and remained young at heart.

Her daughter Mona Shaver (nee Levine) passed away in a tragic accident in August, 1994.

After graduating from a 2 year training program, Lorraine worked as a medical assistant and laboratory technician. This was her profession until she moved from Far Rockaway, NY to Poughkeepsie, NY in 1978. Lorraine then worked for a market research and survey company, supervising over 100 workers in the North East region, USA.

Lorraine became a National Service Officer and Adjutant for the Veterans Administration as a result of being involved with the Hudson Valley Chapter for American Ex-POWs for which she also served as Corresponding Secretary. She helped veterans obtain the benefits that were due to them as a result of serving in the military. She was grateful to be a volunteer, and was honored and recognized for her service.

Lorraine always tried to look on the bright side of things and could find good in anyone or anything. She respected the opinion and beliefs of others. She enjoyed keeping up with the news. She was a wonderful dancer and enjoyed singing along with American Standards. Lorraine took pride in her children and was proud that they are good people who are loving, kind and generous to others. The family is extremely grateful to Verona Wynter who was a devoted and trusted caretaker and friend, who adored Lorraine very much. Lorraine will be missed by her family and all who knew her.

Services are under the direction of McHoul Funeral Home of Fishkill, Inc, NY.
Read Less

Consider providing a gift of comfort for the family of Lorraine Cohn by sending flowers.

We encourage you to share your most beloved memories of Lorraine here, so that the family and other loved ones can always see it. You can upload cherished photographs, or share your favorite stories, and can even comment on those shared by others.

Posted Feb 17, 2021 at 08:41pm
Just want to send my deepest condolences to Mitchell and the family. My heart hurts for all of you. I truly know what you're feeling right now. All I can tell you is eventually you will learn to remember your mom with a smile. Hugs to all of you.
Arny (Mindy's sister)
Comment Share
Share via: 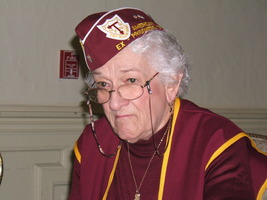