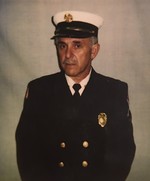 Son of the late Emmanuel and Jean (Koines) Lisikatos, he was born in Cold Spring on January 2, 1939. George worked as an electrician and belonged to the I.B.E.W. Local 363. He retired in 2005.

He was a charter member of North Highlands Engine Co. 1, where he served as Chief and Commissioner and was instrumental in the rebuilding of the firehouse. He was proud to be the patriarch of three generations of service to the department, having his footsteps followed by his son and grandson.

George’s hobbies included camping and the outdoors. He was a skilled handyman who enjoyed working around the house and lent his skills to help family & friends on various home projects.

On April 22, 1961, he married Anna M. Etta at Our Lady of Loretto Church in Cold Spring. Anna survives at home.

A Memorial Mass of Christian Burial will be offered at 11 a.m. on Saturday, February 27 at Our Lady of Loretto Church, 24 Fair Street, Cold Spring. After the service, a funeral procession will pass by the North Highlands Engine Co. 1 Fire House, followed by interment at Cold Spring Cemetery.

Please note: In accordance with NYS guidelines, face masks and social distancing are required and capacity may be limited.

In lieu of flowers, memorial donations may be made to Our Lady of Loretto Church, 24 Fair St., Cold Spring, NY 10516.

Arrangements are under the direction of McHoul Funeral Home of Fishkill, Inc., 1089 Main Street, Fishkill. For online tributes, you can visit George’s Book of Memories at www.mchoulfuneralhome.com.