To share your memory on the wall of Richard Griffin, sign in using one of the following options:

Richard is survived by his wife Hyunsook (Sue) Ohm, twin sons from his first marriage Michael and Ryan Griffin and two sons by marriage, Joseph and Eugene Ohm as well as his grandchildren, Keller Griffin, Kaia Griffin, Terance Ohm, Chase Ohm, Robinson Ohm, Wesley Ohm and Austin Ohm. Richard is fondly remembered and loved by extended members of both families.

Richard was born December 5, 1941 to parents John Joseph Griffin and Marion Spring Griffin of Willimantic, CT. Richard stayed close to home as a young man, helping his father run a land surveying business based on Main Street in Willimantic and graduated from Eastern Connecticut State University. Richard went on to obtain his Master’s degree in science education from UConn and then taught science in Norwich public schools for the next 40+ years. He was best known as the planetarium director at Teacher’s Memorial Junior High. He taught thousands of children to love science over the years. A life-long tinkerer with electronics and mechanical equipment, Richard fashioned a planetarium control booth suitable for a space ship where he produced astronomy programming for students throughout CT.

Richard met Sue Ohm in 1998, forming a loving union that would see him through the next 23 years. In this second phase of his life, Richard was a dear, devoted and doting husband and quickly became her rock. The couple enjoyed traveling together, exploring and hiking in many different countries. He embraced his new family quickly and soon became adored by another large extended family. He brought his warmth, his humor and his critical mind and left his mark as a father, uncle, in-law and grandfather.

A largely self-taught scientist, electrician, plumber, mechanic and musician, Richard could talk with anyone about almost anything. Whether he was surprising guests with his soulful piano playing or fixing a leaky faucet, Richard left his mark wherever he went. He will be deeply missed.

In remembrance of Richard, memorial contributions can be sent to Bartlett Arboretum and Gardens in Stamford, CT. (http://www.bartlettarboretum.org/).

Funeral services for Richard will take place at: Korean Presbyterian Church of Westchester, 50 Pintard Avenue, New Rochelle, NY 10801 on Monday, April 5, 2021. The wake will be held at 5pm and the service will be at 6pm. Arrangements are under the direction of the McHoul Funeral Home, Inc., Hopewell Junction, NY.
Read Less

Consider providing a gift of comfort for the family of Richard Griffin by sending flowers.

Posted Apr 05, 2021 at 10:24pm
Mr. Griffin was a family friend for the last 6 decades, and I have known him my entire life. My earliest childhood memories are of him making a splashy entrance into my parents' driveway in Connecticut, at the wheel of his Corvette sports car. He also liked to serenade us on my mother's piano. Seemingly quiet, he was a man of many talents and interests, and could entertain us with discussions about the solar system, politics, photography, the latest model of Nissan, the real estate market, computer technology, and home repairs. Mr. Griffin will be deeply missed by those who knew him. Sending my condolences to the Griffin and Ohm families.
--Christine Carrizales
Comment Share
Share via:
WK

Posted Apr 05, 2021 at 08:58pm
It is with great sadness that we bid farewell to our friend of 60 years, Richard Griffin. He was a loving, wonderful, highly honorable man that we learned to love. We send our condolences to both of his families. May bands of angels sing thee to thy rest, Dear Friend. William and Sandra Kotrba
Comment Share
Share via:
YJ

Posted Apr 04, 2021 at 11:26pm
My heartfelt condolences to Sue and the Griffin & Ohm families. Richard was a very kind and gentle person. When I first met him, I couldn't figure out anything about his profession because he was knowledgeable in many subjects. We spoke about sports cars, welding, lawn care, installing lights in closets, power tools, radon mitigation, chemistry, flying drones, music, photography and so on. It took almost three years before I figured out that he was formerly a teacher. He enjoyed numerous hobbies and always found humor with the day to day activities. One of the last discussions we had was about upgrading his sports coupe for the C8 Corvette. I promised him that if I had a chance to exchange for a test vehicle and bring it back from Detroit, that we'd take a drive around the dizzying roads of Bear Mtn. I feel extremely fortunate to call Richard a friend and my heart breaks for your loss.
Comment Share
Share via: 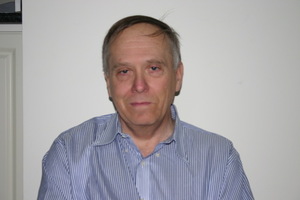