To share your memory on the wall of Robert Polidore, sign in using one of the following options:

Print
Robert Polidore, 64, a resident of Wappingers Falls since 1984 and previously of Yonkers, died on April 14, 2021 at home surrounded by his family after a courageous battle with cancer.

Born on June 25, 1956 in Yonkers, Robert is the son ... Read More
Robert Polidore, 64, a resident of Wappingers Falls since 1984 and previously of Yonkers, died on April 14, 2021 at home surrounded by his family after a courageous battle with cancer.

Born on June 25, 1956 in Yonkers, Robert is the son of Alfred C. and Anna F. (Rapa) Polidore. Robert worked as a steamfitter for Local Union #21 in Peekskill until his retirement in 2011. He loved spending time with his family especially his grandchildren.

On April 23, 1977 in Yonkers, Robert married the love of his life, Sharon Holze who survives at home. He is also survived by his children, BJ and his wife Alison of Wappingers Falls, Rachelle Cole and her husband Billy of LaGrangeville, Travis and his wife Sarah of Pittsfield, MA; his grandchildren, Kylah, Koral, Haley, Hudson, Jace, Scarlette and Lincoln; his father, Alfred Polidore; his brothers, Al and his wife Carmella, Anthony and his wife Debbie; and several nieces and nephews.

Calling hours will be held on Tuesday from 4-8pm at the McHoul Funeral Home, Inc., 895 Route 82, Hopewell Junction. The Mass of Christian Burial will be held on Wednesday at 10am at St. Mary, Mother of the Church, 103 Jackson Street, Fishkill followed by interment at Fishkill Rural Cemetery.

Memorial donations may be made to St. Jude’s Children Research Hospital.
Read Less

Consider providing a gift of comfort for the family of Robert Polidore by sending flowers.

Posted Apr 21, 2021 at 11:45am
Sharon and family: My sincere sympathy for your loss. We still consider you family and remember all the good times with the Holzes and Foxes. Aunt Betty Fox🦊🦊🦊 and family
Comment Share
Share via:
LM

Posted Apr 19, 2021 at 08:45pm
With our deepest condolences, and healing prayers for you, Sharon and your family. From the Oliveiras, Laura, , Mary Ellen, & Anthony.

Posted Apr 18, 2021 at 06:02pm
So sorry for your loss! We will keep your family in our prayers at this difficult time. RIP Bobby!
Comment Share
Share via:

Posted Apr 18, 2021 at 08:29am
Bob i will miss our sports talks about the kids and grandkids and definitely miss our Monday night diners together with the guys
Comment Share
Share via:
MC

Posted Apr 16, 2021 at 10:31am
Rest in Peace Bobby, Bob and I worked side by side running many big piping projects over the years. I could not have asked for a better person to work with. Thanks for being my friend and brother of LU21!
Mike & Valerie Costakis
Comment Share
Share via: 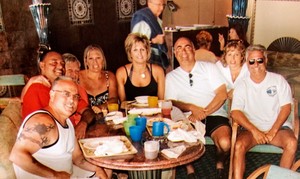