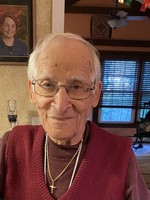 FISHKILL – Dominic P. Greco, a Fishkill resident since 2009, formerly of White Plains and the Bronx, passed away on Wednesday, June 15, 2022. He was 102. Son of the late Angelo and Saveria Greco, he was born in Mendocino, Italy on April 8, 1920. He later emigrated to the United States and in 1942 enlisted in the U.S. Army. Dominic served in the European and North African Theaters during World War II and was honorably discharged from service in 1945.

He dedicated many years as a Postal Clerk at the General Post Office in the Bronx. Dominic was a parishioner of St. Mary, Mother of the Church in Fishkill and was a member of the American Legion and Honor Flight program for Veterans. His interests included opera, art, travel, and history. He also enjoyed baseball and was an avid New York Yankees fan. More than anything else, he truly cherished spending time with his family. On June 3, 1956, he married Mary Mastromarino in New York City. Dominic was predeceased by Mary on March 5, 2013.

Survivors include his daughter, Donnamarie G. Jones & her husband Roger of Fishkill; and his granddaughter, Angelamarie Jones of New Paltz; and his many nieces and nephews. He was blessed to have the friendship and support of his daughter and son-in-law’s friends as well as friends from the Bronx and his friends and neighbors at the Regency at Fishkill.

In addition to his wife and parents, Dominic was also predeceased by his siblings and their spouses, Joe and Albertina Greco, Dora and Joe Perrupato, and Lou and Mary Greco; as well as his niece Anna Squillante.

Calling hours will be held from 3 to 7 p.m. on Friday, June 17 at the McHoul Funeral Home of Fishkill, Inc., 1089 Main Street, Fishkill. A Mass of Christian Burial will be offered at 10 a.m. on Saturday, June 18 at St. Mary, Mother of the Church, 106 Jackson Street, Fishkill. Entombment will follow in the Garden of Peace Mausoleum at Rose Hills Memorial Park in Putnam Valley.