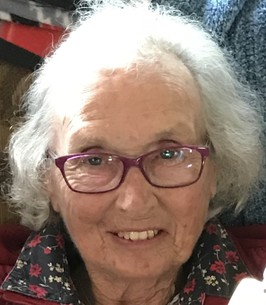 Nettie Jean Ruland West , of Lagrangeville, NY and Oak Bluffs, MA, passed away peacefully in her sleep on September 17, 2022 at the age of 96.

Nettie was born in Schoharie NY in 1925 to Christina Mariah Youngs Ruland and Everett “Duke” Ruland. An only child, Nettie grew up studying violin and piano. She was the first woman in her family to attend a 4 year college, and was awarded her Bachelor’s degree in Music from Skidmore College in 1947. Nettie married James Russell Langwig Jr. in 1947 after he returned from WW II, where he served in Hawaii as a codebreaker, and commander of the USS Ash, a net tender at Pearl Harbor. They had three children, and Nettie spent many years being a full-time parent. During those years Nettie played in the Orchard Park Symphony Orchestra. She also obtained her Masters in English Literature from SUNY Buffalo. and became passionate about helping children in under-resourced communities. During the late 1960s and early 1970s Nettie spent many hours visiting children in the projects of NJ, supporting them with their reading and writing skills.

When she moved to Lagrangeville, her marriage broke up, and Nettie began teaching violin at Dutchess Community College. She played in many local orchestras including the Bard College Community Orchestra, the Vassar College Orchestra and the Woodstock Chamber Orchestra. It was after a concert where she first met Bob West, her beloved husband for the next 32 years. Nettie went on to start her own music school in her home, where she taught scores of children. During the summers she ran a Violin Camp at Freedom Park, and she was honored to bring a group of her students to Carnegie Hall. Nettie and Bob traveled all over the world, including twice to Japan, where Nettie studied with Dr. Suzuki himself.

Nettie was also an active member of the Bulls Head Oswego Quaker Meeting, and was an avid participant in the Alternatives to Violence Project, which brings Quaker principles to prisons. For many years she visited inmates at the Green Haven Correctional Facility faithfully, sharing conversation and Meeting for Worship.

Nettie also loved Martha’s Vineyard, where she spent considerable time. She wrote the Eastville Lagoon column for the Vineyard Gazette for years, attended Quaker Meeting on the island and loved swimming in the salt water, sunning herself on the beach or sitting on the deck reading a book, having a glass of iced tea.