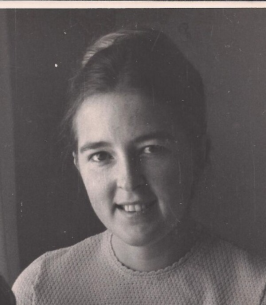 Margaret Ann Havas was born in the ancient city of Norwich, England on February 6, 1938. On November 21st she lost her thirty-plus year long battle with Parkinson's disease.

Margaret was the second child born to Albert Hinchley and Eugenia Button, who went on to raise a family of five children through the difficult times during and following WWII. As a teenager she took a job as a seamstress to help the family, who remain close knit to this
day. As a young woman she met and married an American serviceman who took her to New Mexico and revealed his alcoholism and abusive behavior. She would eventually escape this unfortunate situation and end up in New York City where she would meet her future husband and father of her two sons.

Janos Havas (1934-2016) was a Holocaust survivor and a refugee of the 1956 Hungarian Revolution. Margaret would follow Janos to Dayton, Ohio with their first-born Christopher. In Dayton Andrew was born. In 1970 Janos took a job with IBM and the young family would move to Wappingers Falls, New York in 1968. In 1970, Janos and Margaret had a new house built in Hopewell Junction, where they raised their kids and lived out their days.

Margaret was a very dynamic woman, and took care of everything to do with the house inside and out, leaving Janos to concentrate on a career that was to blossom over the years. She was interested in many things, and introduced her children to many pursuits such as music, sailing, horseback riding, and travel. She gave her kids a very long reign, and never failed to be supportive. If they misbehaved however, they were swiftly whipped with the dreaded wooden spoon!

Margaret was a very private person, but was well loved by the people who knew her. She worked briefly as a tour guide for Aristocrat Tours in Poughkeepsie, NY, and for years after she still received Christmas cards from many of her guests. She worked as a Hospice volunteer, and even took courses in Dental Lab Technology at Dutchess Community
College. She attended many sports car racing events with her son Andrew, and was adored by all in the paddock where competitors gathered as a second family for race weekends. Her homemade Chili was always a big hit. She loved thrift shopping and Antiques Roadshow, and had a whole host of other interests.

How she faced down Parkinson's without ever complaining is a testament to her strength. Margaret outlived all of her doctors expectations, continually defying the odds against her. This was in large part due to the loving and compassionate care given by Gift Boonnil for the last ten years. With people she loved at her bedside she died peacefully at home.

Margaret leaves behind her two sons, one daughter in law Alex, two grandkids Ben and Tom, and a lifetime of good memories.

As per her wishes there will be no service, and her ashes will be returned and scattered in England.

There will be a celebration of life for Margaret at a later date. If interested, please email Andrew at havspeed@gmail.com