To share your memory on the wall of Maureen Weisner, sign in using one of the following options:

Maureen was born in the Bronx, New York, on October 16th, 1959, and was the daughter of Raymond and Jeannette (VanWagner) Turnbull. She spent her early years in Hartsdale and Carmel, New York where she attended local public schools. Maureen was loved by all and was especially known for her boundless sense of humor and joy this imparted to all she met.

A hairstylist by trade, Maureen owned and operated Country Cutters Hair Salon, in Hopewell Junction for almost ten years. To her many clients, Maureen was known not only for her incredible haircuts but also for her lighthearted manner and irresistible wit. To know Maureen was to love Maureen.

On December 6th, 1980 in White Plains, New York, Maureen married the love of her life, George Weisner, who survives her at home. The pride and joy of her life, however, remained to the end, her two children. She is survived by her children and their spouses, Lindsey and Chris Denneen of New Windsor, and Matthew and Deborah Weisner of Schofield Barracks, Hawaii; her grandchildren, Emma Denneen, and Raegan, Matthew Jr. and Colton Weisner; and many other loving family members and friends.

She was a parishioner of St. Kateri Tekakwitha Church in LaGrangeville.

Her favorite role in life was that of “Nana”. She loved her grandchildren with all of her heart and would spoil them to no end. She was looking forward to the birth of her granddaughter, Shea Kathryne Denneen, in the coming few weeks.

Calling hours will be held on Monday from 2-4 and 7-9pm at the McHoul Funeral Home, Inc., 895 Route 82, Hopewell Junction. The Mass of Christian Burial will be offered on Tuesday at 10am at St. Kateri Tekakwitha Church, 1925 Route 82, LaGrangeville followed by entombment at Ferncliff Cemetery.

Memorial donations may be made to the Leukemia and Lymphoma Society, 1311 Mamaroneck Avenue, Suite 310, White Plains, NY.
Read Less

Consider providing a gift of comfort for the family of Maureen Weisner by sending flowers.

We encourage you to share your most beloved memories of Maureen here, so that the family and other loved ones can always see it. You can upload cherished photographs, or share your favorite stories, and can even comment on those shared by others.

Posted Sep 09, 2019 at 02:20pm
Dear Weisner Family,
We at the Hopewell Drugstore will truly miss Maureen. We are grateful we got to know and take care of her. Her courage and strength during her bout with cancer was inspiring. We will miss her warm smile and bubbly personality.
Lovingly,
Steve ,Karen , Lisa ,Jessica, and staff

Posted Sep 06, 2019 at 01:55pm
We are all so very sorry to hear of your Aunt's passing. Thinking of you and your family during this difficult time. 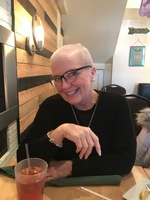