To share your memory on the wall of Peter Chadwick, sign in using one of the following options:

Born in Dobbs Ferry on July 24, 1938, Peter was the son of the late Christopher and Anne (Billie) Chadwick. He proudly served in the US Navy from 1957-1961. Peter was employed by the Poughkeepsie Medical Group until his retirement.

Visitation will be held from 2 -6 pm on Sunday at the McHoul Funeral Home of Fishkill, Inc., 1089 Main Street, Fishkill. A Mass of Christian Burial will be offered at 10 am on Tuesday at St. Mary, Mother of the Church, 106 Jackson Street, Fishkill followed by inurnment at the Community Mausoleum at Fishkill Rural Cemetery with military honors.

Memorial donations may be made to Castle Point VAMC. Please visit Peter’s Book of Memories at www.mchoulfuneralhome.com.
Read Less

Consider providing a gift of comfort for the family of Peter Chadwick by sending flowers. 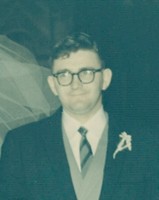